Hi, guys, sorry it’s a few days late. I had a university thing I had to finish so I had no time to sit down to update. But the next update will still be up as if I’d updated on Monday.

We’re almost done~ One more part before the last NSFW scene and then the last part – the epilogue. Then we’re moving unto TATEV~

The next day there was clear, cloudless weather.

For the sake of seeing off his family that was returning to Japan having exited outside from the entranceway, Takahito squinted his eyes at the radiance of the glitteringly reflective snow.

Maybe because he had rested early last night, in the morning Arthur’s fever had gone down, and because the quite recovered person himself had insisted on it, with Eugene in attendance, he had also gone out to see them off.

In front of the three people, who were seeing everyone off, the returning party was one by one loading luggage into the two cars.

To tell the truth, he would have liked for them to stay a little longer, but everyone has their own life, as well as work and school.

Amongst such busyness they had made time and had come to United Kingdom. He could not burden them with any more of his selfishness than this.

Coming from one of the 4WD cars, dad, mom and Kizuki stopped in front of Takahito. Dad with his trademark large/deep facial features and stubble, mom who in contrast had a delicate, pretty face and behind that dad and mom there was Kizuki whose looks were a split between the two of them. Takahito fixedly stared at those three faces.

As he thought that in a short while they would be separating, there were things urging him in his chest.

Almost as if he was trying to burn it into his retinas, silently looking down at Takahito’s face, his tall dad opened his mouth.

“Last night while in bed, I recalled Tsukiya-san’s words from the time your mom was given into my care. He had said – ‘For you too there will probably at some point come a day when you will experience the same feeling as I do right now.’ When I think about it now, it sounded like a promise. Evidently, those words have come true.”

“When I met your mom, he was 17 years old. I thought you were still a child, but…before I became aware of it you have reached the same age as your mom had been at that time.”

His father whispered with deep emotion and squinted both of his eyes.

“Our house will always be your home. [1] If you ever want to eat your dad’s and mom’s home cooking, you can come back at any time. Together with your new family.”

[1] T.N. Not exactly what he’s saying. The direct translation would be more like ‘your old home is the house where we are’, but I thought the above version sounds better and pretty much expresses the same sentiment.

Holding back his tears, Takahito nodded.

[T.N. Btw, I love their dad. I’m in the middle of reading the novel about them, and he’s pretty much my favourite seme in the series. I put this pic on Twitter at some point, but I feel like putting it here as well. It’s a pic from the manga adaption of the novel. I’m usually not a fan of bearded guys in manga, but this guy is one fine piece of meat.] 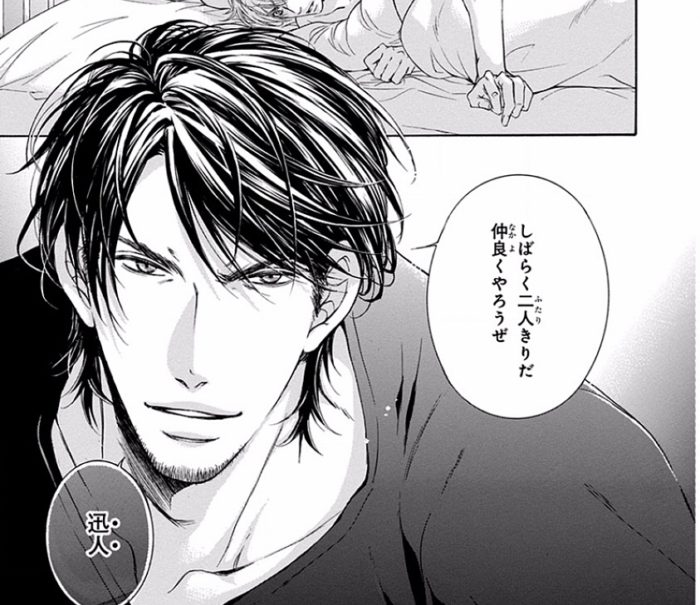 [Btw, in the white bubble he’s saying something like ‘For a short time we’ll be all alone the two of us, let us get along, shall we?’ and the black one is ‘Hayato’ (Takahito’s mom’s name)]

His mom, who was standing next to his father and even now had a face like he was about to begin to cry, took one step forward and tightly hugged Takahito.

“Your mom has received great happiness by being able to meet a ‘pair’ like your dad, having been blessed with you and having been able to raise you.”

“That’s why…I’m happy you have been able to meet your ‘pair’. Please support each other and become happy. You don’t have to worry about the things at home.”

Takahito hugged the slender body in return and let go of the embrace. When he looked at his mom’s teary red eyes, suddenly the supressed tears spilled out.

“Idiot, why did you start crying?”

Kizuki reached out his hand from the side, and lightly poked his head. Wiping away the tears with the back of his hand, with trembling lips Takahito asked his older brother.

Nodding, Kizuki stepped up to Arthur who was standing next to Takahito. He directly stared at Arthur’s one remaining eye.

“I had thought that I understood Taka better than anyone. However, seeing Taka defend you so fervently and loudly exclaim ‘I won’t go back!’ I was surprised. It was my first time seeing Taka act like that.”

With Kizuki beginning to speak, Arthur also listened carefully with an earnest expression.

“Since he cared about you to this extent…I think this has to be the real thing. Even though, things like fated partners, I don’t yet understand them too well.”

Cutting off his words, Kizuki deeply lowered his head.

Takahito exclaimed in a surprised tone and Arthur expressed his gratitude with a quiet facial expression “Thank you.”

“Because you have given me your precious Takahito, I will take responsibility and protect him. Also, I will certainly make him happy.”

Having taken over the responsibility like that, he held out his hand to Kizuki. Kizuki took that hand, and they did a handshake.

At the sight of Arthur and his older brother shaking each other’s hands, again tears spilled from Takahito’s eyes.

Even though he had almost never cried since he had been a small child, after Arthur had been injured, he has been constantly crying as if his tear glands had broken.

Watching over the exchange from a place not far away his uncle called out.

“Take care,” his uncle said in a deeply emotive tone at Takahito coming up to the three of them.

“If he saw you being treated preciously he would understand. If you are happy, Sensei [1] would not condemn you. You know that, right?”

[1] T.N. Most of you probably know sensei means ‘teacher’ in Japanese. In the first novel – Hatsujou – the uncle, Takao, often refers to and calls his uke, Yuuki, who is a school teacher by profession, ‘teacher’. I left it in Japanese, because in this case it functions more like a nickname than a description of his profession, and leaving it in Japanese makes it feel more special. At least, that’s my opinion.

Supressing his swelling emotions for the umpteenth time in a row, Takahito nodded his head.

“Grand uncle. Tell Tsukiya-san that I will come see him together with Arthur…”

Knitting his eyebrows as if he was supressing his regret or reluctance to part, his grand uncle replied “Understood.”

“Understood. I’m sure he will be relieved. However, Takahito-san, please, definitely return to Japan soon and let the family members that could not meet you today see that you’re fine as well.”

Tsuzuki pushed up the frames of his glasses and emphasized.

When the farewells had been finished, Arthur approached his uncle and extended his hand.

“As the representative of the Gosford Family, I am from the heart thankful for the Jinguuji Family’s open-minded support.”

His uncle gripped that hand.

“Most likely we are connected by a far-away ancestor. Being hostile to the few brethren that we have even at the best of times is nonsense. Today, at this moment let us put an end to the 17 year long negative spiral.”

The two leaders, who had reached an agreement, exchanged a firm handshake. In Takahito’s eyes it looked like when it came to height and physique Arthur won slightly, but the strength of their aura was even.

In the event of the Gosford and Jinguuji Families having been able to build up a stable, cordial relationship, Takahito had a hunch that in the future Arthur and his uncle could become good friends.

“I hope Takahito’s existence will become like a bridge between the Gosford’s and the Jinguuji’s. From now on please forever treat us like family.”

At his uncle’s words, a smile rose on Arthur’s face.

“It is I who should say so/same to you.”

Letting go of Arthur’s hand, his uncle told Takahito “see you” and got into the car. His uncle sat in the car and everyone settled into the two cars as well.

The car his dad was driving and the car Tsuzuki was driving begin to move, making the snowy road creak.

Opening both left and right window, his mom and Kizuki waved their hands at him.

Takahito also waved his hand back. Until his hand began to hurt and beyond, he continued to wave his hand widely back and forth.

The figures of his mom and Kizuki, who were leaning out of the windows, slowly became smaller. Chasing after the car that was disappearing into the distance, Takahito began to run. Even though he was running at full speed, the distance gradually widened. The cars became black points, and once he couldn’t even see their silhouettes, Takahito finally stopped.

Spitting out white puffs of breath, as his shoulders moved up and down, the sound of footsteps treading the snow got closer. The slow, careful steps soon stopped behind him.

Arthur’s large hands embraced him from behind, and Takahito put his own hands on top of them.

If he said separating from his family was not painful, that would be a lie.

But…he had Arthur. And he also had Eugene.

He had a new family.

Turning his neck, Takahito gazed at his one-eyed partner and said while smiling.

“Let’s return to the house.”