Originally, I was gonna upload DLLB today, but it turned out I finished the next part of Affection today, so here it is. DLLB will be up tomorrow.

In other news, I finished that Affection fanart, I’ve attached below under the chapter. Hope you like it~

Also, Thank you to Setsuu for the coffee~ I appreciate it~

Arthur took of his sweater, and exposed his front by undoing the buttons of his shirt. Before long, he started taking off Takahito’s clothing that he himself had bought.

Up until now he had either been naked from the start or even if he was wearing pyjama, during those time as well because they had connected themselves hurriedly he had stayed in those clothes until the end.

That’s why them diligently following the proper procedure on the bed like this…since something like this was happening for the first time, for some reason Takahito felt nervous.

That was because he had a feeling that it was proof they were about to mutually embrace each other.

He continued with the cashmere sweater. Raising his hands in a banzai pose (up in the air), Takahito also cooperated to make it easier to undress him

Next was the shirt. When Takahito tried to undo the buttons himself, he was restrained by a “Don’t.”

“Since I’m the one doing it, you just have to be still.”

Since he could not avoid being ordered, Takahito entrusted his body to Arthur. Arthur’s strongly jointed long fingers undid the buttons of his shirt one by one. Each time that happened, he fell into an illusion like his very stiff body was being opened.

Undoing all the buttons, he completely opened the sides of the shirt. Furthermore, the man removed his belt, and in one go lowered his pants along with his underwear. Pulling off the underwear from his ankles Takahito became stark naked without a stich on him.

Donesies! Next is chapter 10. It’s super long, so it’ll be split up in 6 parts, the first one will be up in a week.

Then, here’s the fanart: 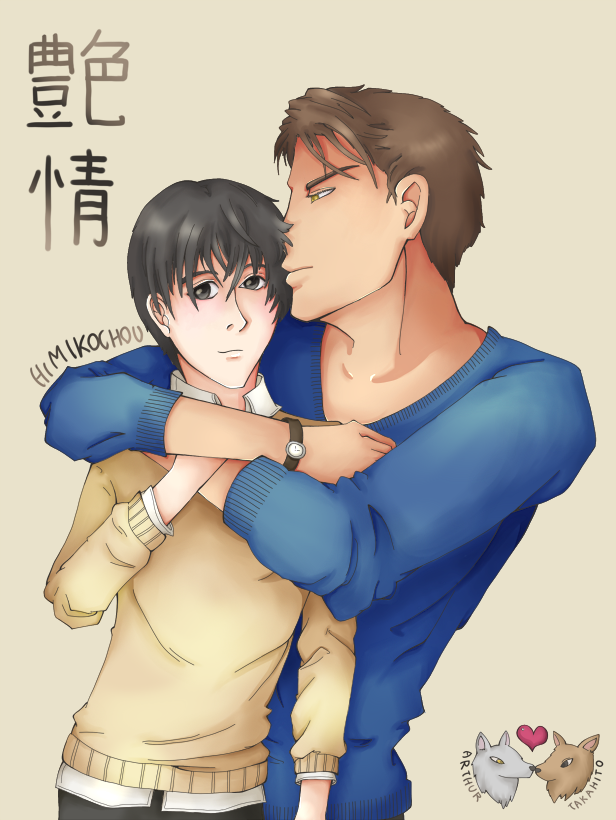 It’s been forever since the last time I properly painted in Sai. It’s all thanks to a Youtube tutorial that finally let me properly configure the Airbrush and had some neat tips and tricks. All that’s left is just practicing themXD

The full size picture is available to Patreons, and I’ll be putting it on my Deviantart as well (despite the fact I barely use that thing…ehh).

Anyways, hope you like and if anyone wants to draw something as well, I’ll gladly put it here as well.