I promised you a sneekpeak this week, and here I am delivering.

This is the start of my new translation project – Affection: Call of the King (艶情：王者の呼び声). Link to info page – HERE.

It’s a werewolf romance, that’s not exactly ABO, but it’s certainly inspired by it (You’ll understand when we get to it). It’s also part of a two book series, as the story does not end with this book, but I don’t have the second book in my possession. I have seen it on Amazon Kindle though, so we’ll see.

Anyways, here’s to the beginning of a new story~ 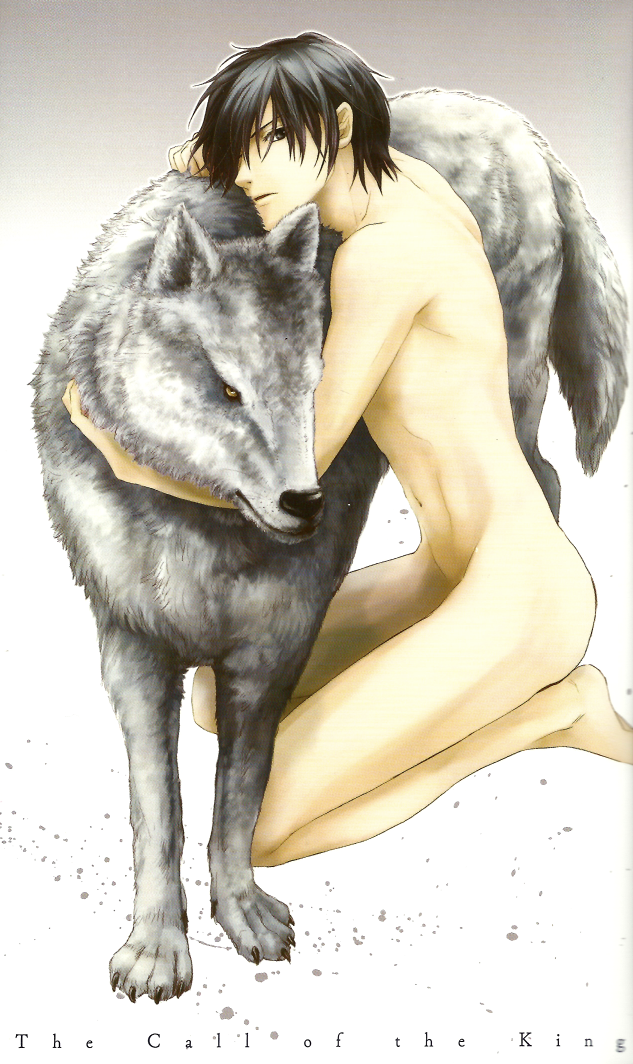 (not the cover of the book, a lot of Japanese novels have a color page as the first page of the book, SNITIP was an exception)

It was the kind of winter day when the freezing cold air soaked in to the marrow of one’s bones.

In the hilly area where snow had lightly piled up like sugar powder, the solemn sound of a bell echoed.

The reason its gloomy sound was heard far away was because it was a bell used for the memorial service of the deceased.

The people attending the funeral service were four men wrapped in black suits.

If the pastor was excluded, this funeral service was held merely between those 4 family members.

Although the deceased had descended from the aristocracy and had been the great landowner of the entire surrounding area for a very long time, and could have had the burial of a feudal lord, the funeral service was simple as this was the intention of the chief mourners.

The chief mourners had requested as such from the pastor they had been acquainted with for a long time, so that he would restrain the villagers from attending.

Since the deceased head of the family had reached such an advanced age as 97, the pastor had accepted this wish of theirs.

The ‘Gosford House’ was built on top of slightly elevated ground. Until 200 years ago it had been the manor house of the aristocratic family, and the four people carried the coffin of their grandfather to the cemetery that spread behind it, where generations of their ancestors slept.

When they arrived, every one took a shovel, and silently dug the ground.

Estimating the time it will take to place the coffin in the grave, the pastor began to offer a prayer for the deceased with a Bible in his hand.

“Everyone, today we have gathered here to say farewell to the deceased, so let us take faith in God who is the source of life and pray. So that Our Brother, who we bury today with our own mere hands, will be entrusted to the hands of the Resurrected Jesus and will join the Saints in Heaven.”

Offering the prayer in silence, the men crossed themselves and placed white roses on top of the coffin.

The priest continued with the words of the prayer.

“Our deeply loving God the Father, believing in your only son Christ who You sent to us and the promise of the eternal life, today we entrust Oswald Gosford whose life journey has come to an end in Your hands. Please take away all the heavy burdens of Our Brother, who has departed from us, and lead him to the dwelling prepared for him in Heaven so that he may join amongst the Saints there. Our Lord, please sustain us who are wallowing in the sadness of parting with the promise of the Resurrected Jesus, so that one day we may share the eternal happiness with Our Brother who has been called back to Your side. In the name of our Lord Jesus Christ.”

That was the only word spoken by the four men as the funeral service came to pass.

When the memorial service was over, the men took the shovels in their hands once again and began to throw soil on the grave.

Before one’s eyes, the coffin was buried into the ground. Just when the coffin was about to become completely invisible, a stone cross with the deceased’s age at death, and name engraved on it, was installed in the yet soft ground. One of the men placed a wreath made of white rose on the cross.

With this the funeral service came to an end with no accidents.

As each of them expressed their gratitude to the pastor, they began to walk.

In the vicinity of the cemetery the party had exited, today, the first snow began to fall here and there.

You know when I started translating this part, I thought it would take max 2 hours, since it’s only two pages in the book, but then I got to the prayer part and my brain went ‘くそ．．．’. I’ll be honest, not really a Christian, so I had a hard time wrapping my head around Christian funeral prayer in Japanese. I hope it sounds more or less okay.

On another note, I’m about halfway through reading the book, so I think I should be done by the end of the week, and be able to start translating. Well we’ll see, cuz also need to finally get some order in my room, so that I can have some better working space, and that’s gonna take forever, cuz I’m a messy pig.

If you want to support this new project, consider supporting me on ko-fi so that I can bring you lots of high quality translation. (Actually big thanks to everyone who has been leaving such great reviews about my translation on novelupdate, love you guys~)