Well, the end is here. I can’t honestly believe I just finished translating this book. It has been a very long journey. I bought this book in January while I was still living in Japan as an exchange student in a bookshop in the center of Sendai. Not long after I got the idea to translate it and started working on it. It was really hard work in the beginning, as my Japanese wasn’t stellar and I often wanted to bash my head in, but I made it work, and here we are today.

Thank you to everybody who has been with this story from the very start, and I hope you have enjoyed the ride.

Well, then, let us proceed to the grand finale.

P.S. don’t read this in any public space, cuz this is gonna get steamy as fuck…

In Yoh’s history the rule of Ryuu Kishoh who is known as the ancestor who rejuvenated the dynasty is the period of ‘the Blazing Emperor’.

During his long reign Yoh’s territory had been increased to the maximum, and prosperity had been brought by importing the cultures of the surrounding countries.

Among the subjugated countries only Ka, by the grace of its last Imperial Princess becoming the Blazing Emperor’s Empress, had its autonomy recognized, and had protected its peculiar culture.

It has been passed down that by the Blazing Emperor’s side, for a thousand years there had always only been the figure of the exaltedly beautiful Empress.

But in all honesty, this has been a very good story, and I have enjoyed it very much, both reading it in Japanese and translating it.

But what’s next in store for this one-woman translation team? I’ve already started slowly working on preparing the next book for translating, I think I should be able to release a sneak peek of it, a part of the prologue, sometime this week.

Again thanks to everyone who has been reading this story, I couldn’t have preserved on to finish this if there weren’t people who enjoyed reading this. I hope you stick around for the next story, and hopefully the ones after that.

I’ll leave you with this cute picture from the end of the book, while I go work on transcribing the kanji in the next one. See you soon~ 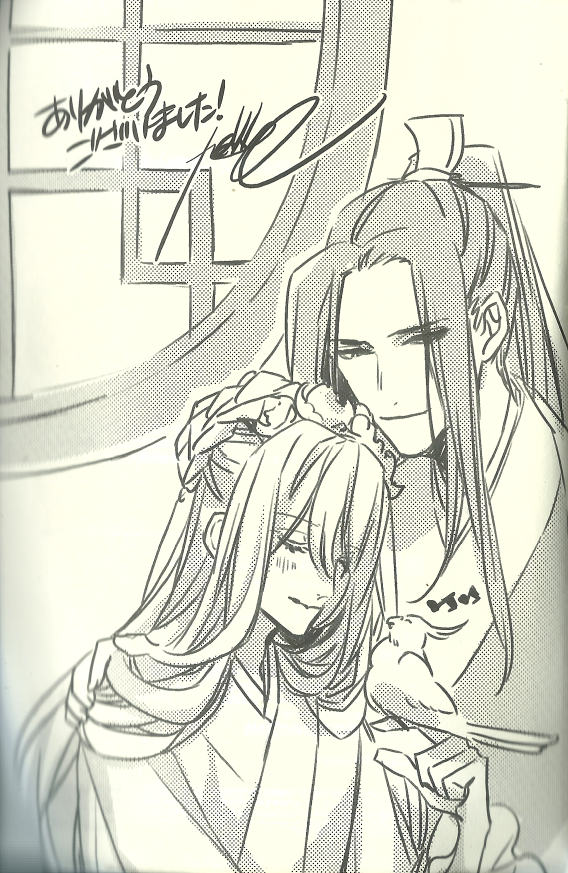 If you had enjoyed this book, and want to support my future projects, please consider buying me a ko-fi to boost my morale and help buy more BL books.