Yosh! This is earlier than usual, but I’ll be busy the rest of the day so here it is. This is a very short part, but I could not cut it up any other way.

With this part I finally had to start making translation notes, I was surprised I escaped them for so long. And the 4 chapter is stockpile full of them, cuz you know ancient harem *shrugs*

I’m happy everyone enjoyed the smut, there’s more to come before we end this novel, so look forward to that~

Btw, thanks for everybody who voted on NU for this novel, it felt really nice.

Running away from the harsh reality, Sekka fell into the abyss of pleasure.

A sound like the murmuring of a stream could be heard.

While he was dozing off, Sekka felt that his body was snuggly surrounded by something large. Mixed with the murmuring, a thumping sound could be heard across his back. He was too comfortable, so he seemed to be falling asleep as it is.

However, he instantly opened his eyes as he realized that he really was being embraced closely from behind. Sound of splashing water rose with the momentum of his movement.

The owner of the arm was Kishoh. He tried, but he did not have the strength to fling off the man’s arm. It made Sekka realize that the recent events had not been a dream.

The sound he had thought to have come from a stream had actually been the sound of hot water pouring into a bathtub. The bathroom enveloped by white steam was brilliantly lit by candlelight, and it was wider and grander than the one Sekka had used not long ago. However, it didn’t have the ornaments made of gems and stones.

“This is the Emperor’s personal bathroom. We’ve cleared everybody out, so unless called nobody will come in.”

Being told implicitly to not worry about his body being seen, Sekka was hit by the realization that Kishoh knew his secret. At the same time, there was a question welling up. What was this man going to do with him, this person who had survived by dressing up as his own older sister?

“You’re a cold one. We enjoyed ourselves to our hearts contents, so shouldn’t we be considered close now?”

Kishoh removed his arm as he chuckled suggestively.

Sekka was startled when he turned around to make a complaint. He had vaguely guessed it, but they were both stark naked.

The man’s fearless body stood out in the candlelight. It was completely different from Sekka’s slender and slim physique.

His sturdy shoulders and wide chest had magnificent muscles, and his abdominal muscles were as tight as if they had been sharpened. Several light scars could be seen on his tanned skin.

He had been violated and subjugated by this body. Furthermore it had made him taste unbearable pleasure.  Already, as thoughts of his own foolishness came to the forefront of his mind, Sekka averted his eyes. Though aphrodisiac had been used, it was no excuse.

His swelling nipples that had been insistently played with throbbed, and his insides that had been penetrated by that fierce thing numerous times felt numb. Just by being exposed to Kishoh’s gaze, a sensation like that of a banked fire concealed under his skin had spread over him.

Was he so vulnerable to desire? Kishoh who had drawn pleasure from this body was frightening, but the most frightening was himself who had joyfully enjoyed it.

“You should be satisfied with this. You can punish me however you wish.”

“It does seem you really want to die.”

Kishoh exclaimed in disappointment, as if thinking Sekka had turned to self-abandonment due to his secret being exposed. He reached out his hand and grasped Sekka’s jaw.

Scowling as he was forced to look up, he met Kishoh’s broadly grinning face.

“We will accept you into the Inner Palace as Our consort [1].”

[1.the word used was 妃. From what I gathered it’s a rank below the Empress, but I can be wrong, since it is not yet clear what rank system the novel uses.]

Consort? Inner Palace? He probably misheard him. He could not comprehend Kishoh’s words.

Finishing Sekka’s involuntary uttered thoughts, Kishoh smiled broadly with his quite sarcastic lips. Because of this expression, he was misapprehended by the fact that the man was aware that he was a hermaphrodite. Now too, Sekka had a feeling the man was taking a dig at the fact that though he was not a woman, he not a normal man either.

“If you don’t reveal it yourself, the fact that you are the prince won’t be exposed. Because, at any rate, everyone except Us was deceived.”

It did seem like nobody except Kishoh knew. However, this truth did not bring any sort of temporary peace of mind.

“That was not the problem…! What I wanted to say was…”

“Originally, in Yoh there are examples of ancient Emperor’s having male concubines [2] in the Inner Palace. As far as We are concerned, it is a trivial matter whether you are a man or a woman.”

[2.寵童-Japanese internet tells me this is a word used for the boys lords would take to the battlefield to help relieve their intimate needs. In this context it could be translated as a male favourite]

As he declared arrogantly, Kishoh took his hands off Sekka’s jaw. Seeing Sekka retreating immediately, he closed his eyes partly in a strange smile.

“The other day, Our close aides spoke about Princess Shungetsu entering the Inner Palace. What they said was it would be regrettable for the first beauty of the midlands to spend the rest of her lifetime locked up in a convent. The counseling people, by no means, thought that the princess could be a man.”

“But, at any rate,” Kishoh continued with an expression of an astute statesman.

“To subdue Ka, there is a need to urgently grasp the hearts of its people. Best way to do that is to accept Princess Shungetsu who is adored by the citizens as a consort. If we are happily married [3], the people of Ka will not be as anxious.”

[3.琴瑟相和する-to go together like two zithers. Basically means to be harmoniously married. This just makes me think of GDC, even though there’s only one zitherXD]

Never, no matter what happens, it is impossible for him to be happily married to this man. Sekka raised the corners of his eyes and scowled at Kishoh.

“What you are saying is that for the sake of Yoh’s overtaking of Ka to proceed smoothly, I’ll be made to continue to pretend to be my older sister?”

“Indeed. The things We can use, We will by all means use, that is Our style.”

Kishoh confirmed without the tiniest bit of shame.

“The remaining officials that are scheming of restoring Ka will probably try to use the Imperial Heir Princess Shungetsu as a banner. If you are locked up in the Inner Palace, contact with such parties can be cut off. The best policy is to pluck the source of trouble before it sprouts.”

“If you are concerned about an uprising, rather than keeping me caged like a bird, wouldn’t it be easier if you killed me?”

In spite of it being his own life at stake, Sekka spoke of it like it was somebody else’s problem. Death was preferable to entering the Inner Palace. He was worried about his maids and soldiers, but since he had once abided Kishoh’s demand, they probably won’t get involved.

Without hesitation, Kishoh shortened the distance between them. Reflexively trying to run away, Sekka’s back soon collided with the rim of the bathtub.

“Didn’t We tell you? You are Our trophy. We’re going to keep you inside the Inner Palace like it was a cage.”

Kishoh’s pair of eyes held a turbulent inner light as candlelight shined from behind him. Sekka felt a chill, regardless of the fact he was soaking in warm water.

“Fortunately, our compatibility also seems to be good.”

Oh, Kishoh, you perv, you got hooked didn’t ya? Next chapter: The wonders of the Yoh harem. Oh boy!

Also on a happy note, my stuff from Japan finally came, so I have all the novels I bought there in my hands now. Yay! 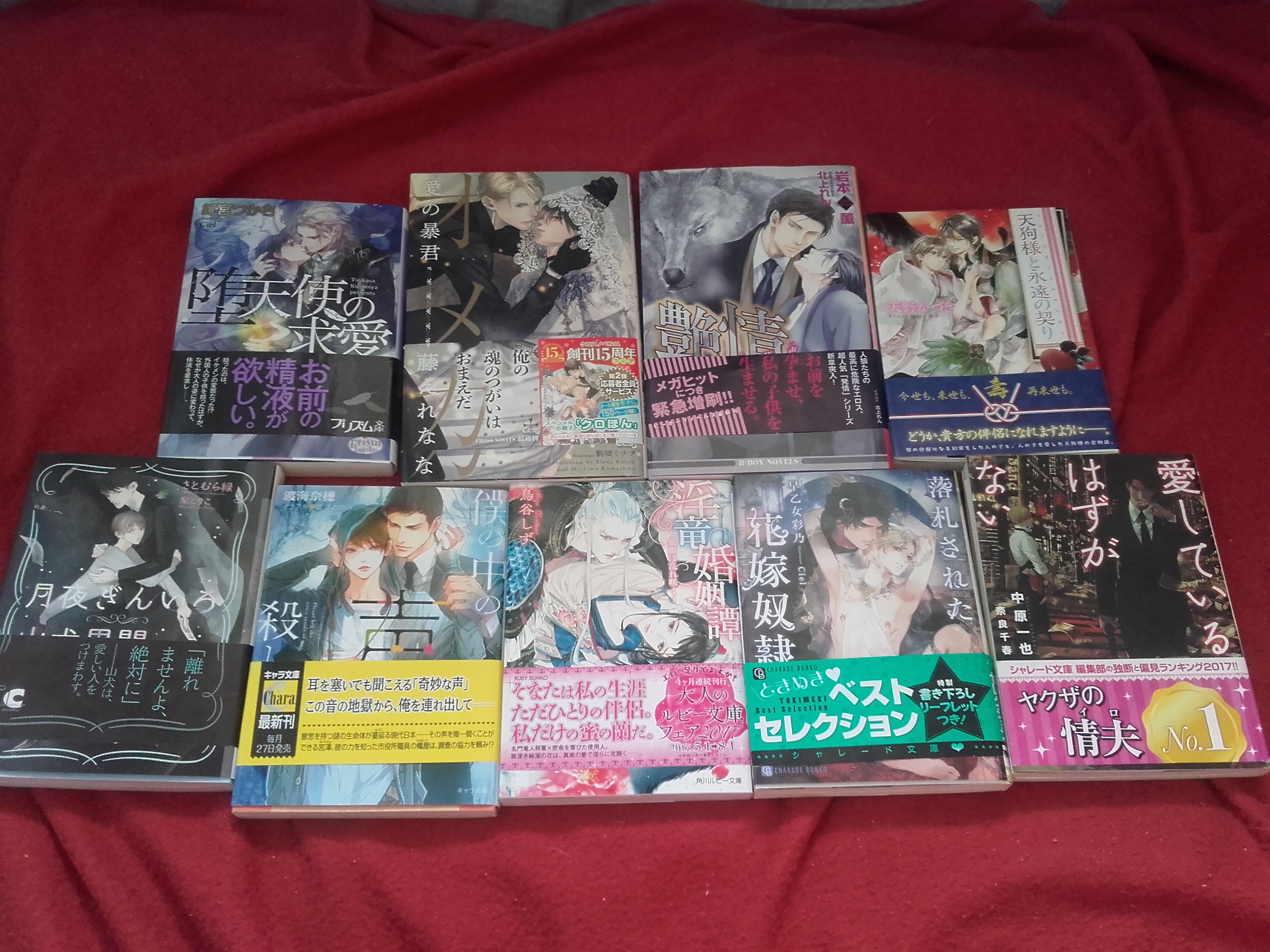 There’s 9 novels in total. I have not yet read any of them, so I’m not too clear on what they are about, but as far as I can tell, there’s two ABO-ish stories, one Yakuza story, one Arab slave story, one more set in ancient times, one with Kami’s (you know shinto gods) and the other three are some sort of modern fantasy pieces. Pity there’s no mpreg one’s though, i think DX I’ll probably let you guys pick what you want to be translated next in a poll or something. I’ll be putting up info and the summary of all the novels slowly on my novels page, should have the first one up today. Other than these novels, I’m also open to suggestions of Japanese BL novels from places like Amazon Kindle store, my preference is for fantasy one’s but I’m more or less open to anything and no kink is too kinky for me eitherXD (I’ve seen too many translators getting all flustered when they get to spicy scenes~)

Anyways, sorry for the info dump, see you next week, if you want to support me so I can get all of these yummy novels translated, consider supporting me on ko-fi~