Yo! I said there will be an update in an hour or so on Twitter, and here I am…

Anyways, as I mentioned before I applied for a Master’s degree and had entrance exams like the day before yesterday and yesterday too, which put me a bit behind on translating, but the big news is that I did get in so…yay?

It’s also reason I’m updating so late (relative to my time zone), I’ve been absurdly sleepy today and I still have to go to the Capital tomorrow to sign the contract. Which is why I’m shelving the poll result announcing and some other stuff till next update.

Other than that, please enjoy!

Thanks to two rounds the sexual excitement had finally settled down, and while entrusting his body to the peculiar post-coital languidness, Takahito completely settled on Arthur’s lap.

Covering himself with the blanket that was pulled up to his shoulders, he absentmindedly gazed at the brightly burning fire.

As he was surrounded by Arthur’s body temperature and ‘scent’, he experienced a feeling of satisfaction he had never tasted before.

However, the happier he felt the more the inerasable feeling of guilt also again flitted through his mind.

In about five more hours the full moon night will be over.

If he had the free time to do this sort of thing, he should be working out an escape plan.

Run away and return to Japan. To Tokyo where everyone was waiting for him.

His family, relatives and close friend Michiru, there was not a day he did not remember his precious people in Japan.

Even if physically they were far away, when he closed his eyes everyone’s faces floated behind his eyeballs.

He wished to meet them from the bottom of his heart.

But, to the same degree as that…he also wished to stay together with Arthur like this.

It felt like his heart and body were being split apart by the two contrary desires.

Far from running away from Arthur, he felt peace being embraced by those arms…if his family knew of this, what would they think of him?

For the Jinguuji Family the Gosford Family was also a destined opponent.

Kizuki would definitely be very angry. He would probably call him a traitor. Even if he was slandered, there would be nothing he could do.

(Even if I’d make everyone sad…I…)

As his name was called Takahito came back to himself with a start. As he twisted his neck and looked back, he saw an anxious expression float on Arthur’s face.

Shaking his head, he drove away the troubles that had pulled him down since the morning. In any event, it was not a good plan to display suspicious behaviour and make Arthur cautious.

After he had persuaded himself of that, Takahito spoke out a question that had suddenly come to his mind.

“What sort of people were your parents?”

“Why are you asking such a thing?”

Arthur asked in a quizzical voice.

“I’ve heard tales of your grandfather Oswald who was the elder, but since I’ve never heard anything about your parents, I was wondering what sort of people were they.”

When you like someone, you begin to want to know everything and anything about them including that person’s roots and upbringing – that was the feeling Takahito was currently experiencing in practice.

Before when he had not known love, he had put a line between himself and other people and had not let people approach him easily. To that extent, he had not pried into other people extensively.

He thought that had been evaluated as a ‘cool’ way of doing things.

That ‘cool’ him was unable to supress the desire of wanting to know anything about Arthur, and unintentionally asked a prying question.

“Because my mother died soon after I was born and my father too died two years later in an accident, I have no memories of my parents.”

As if persuaded by Takahito’s explanation, Arthur began to speak.

“That’s why there is not a lot I can tell. There are stories I’ve heard from Eugene and my grandfather, but…is that fine?”

“I’ve heard that my father had both a tough body and leadership skills, he was a born Alpha wolf. It could be said he had even surpassed Oswald who had saved the family from the danger of extinction as it seems. If he had lived, most likely he would have been the one in charge even now. If my father had been the leader, the Gosford family probably wouldn’t have fallen into this sort of situation either…”

As Arthur said that in his voice there appeared to lurk bitterness about his own worthlessness in comparison to his great father.

“After dad died in a car accident, grandfather who had once retired had been reinstated as the head of the Family. It seems like there had not been any other qualified person at the time. …grandfather had also been an absolute leader, but as can be expected nobody can struggle against advancing age, and I think in his last years there were occasions where his judgement was lacking.”

The man was probably speaking about Oswald obstinately keeping the agreement between him and the Jinguuji Family.

Arthur who had inherited the post from his grandfather and had run the ‘Eve’ kidnapping operation probably felt regret at having been too late.

“My mom was a…doctor. She met my dad when she worked in the clinic in Cotswold and fell in love. Even though she knew of my dad’s identity she had not been scared, she had accepted the existence of werewolves and married my dad. The next year after marriage Eugene was born. After that, there was a long blank before she became pregnant with a second child. My doctor mom fully knew the burden giving birth to a werewolf child put on the body, but she pushed against the impossible and gave birth to a second child. Because Eugene’s body had been weak from birth, no matter what she had to have another…that was probably what she had felt.”

Perhaps, she had felt it was her duty to give birth to an Alpha who could inherit the headship of the family from her husband and Oswald.

“However…in the end the burden on her body had been larger than expected. There was also the fact that she gave birth at an advanced age, so soon after I was born her condition worsened and she died. Since my father also died two years later, as it stands I was raised by Eugene and my grandfather.”

Listening to Arthur’s story, Takahito was reminded of his grandfather and grandmother. He had not heard it directly from his grandfather, it was a story he had heard from his mom.

Just like Arthur’s mom his grandmother also fell in pre-destined love with his grandfather,  gave birth to two sons – his mom and uncle – and then died.

It was clear his grandmother had understood.

If she repeated the difficult birth she had when his mom was born one more time, what would happen to her.

Nevertheless she had given birth to his uncle.

It was different than those examples, but once again Takahito thought his mom whose body had feminized and who had given birth to him and Kizuki was amazing. Although it was great that as a result he was able to safely deliver them, one wrong step and both them and his mom would have been in danger.

The strong desire to give birth to the child of the man you love.

The determination to give birth to the conceived child even if you have to exchange your own life.

Takahito was still unable to understand either of those things.

Without thinking Takahito spilled out in an admiring voice.

Expressing his agreement, Arthur as if thinking of something caressed Takahito’s stomach with his palm. The loving movements of that hand bewildered Takahito.

Not answering that, this time Arthur rotated Takahito’s body putting him sideways. On top of that the man hanged over him and pressed his ear against Takahito’s stomach.

“Again, what are you doing?”

Thinking for a while, Takahito spoke out loud the answer that had flashed in the back of his mind.

“Perhaps…you are confirming whether we’ve conceived a child?”

Because they’ve had intercourse in wolf and human form on a full moon night Arthur typically would probably have a thought like ‘this time definitely’ in his mind.

(I understand those feelings, but)

“That…even if that is so, you probably won’t know it even if you put your ears against there?”

For example even if he had been fertilized earlier, there’s no way you can hear foetal movement this quickly.

“We won’t know whether I’ve conceived unless we ask Eugene.”

Arthur responded in a bit sulking voice at Takahito pointing this out.

Was this understanding it with one’s head, but still doing it sort of thing?

Takahito was surprised by the teenager like behaviour of the man who was twice the adult he was, whose life experience was also higher and who had the charismatic personality of an Alpha. 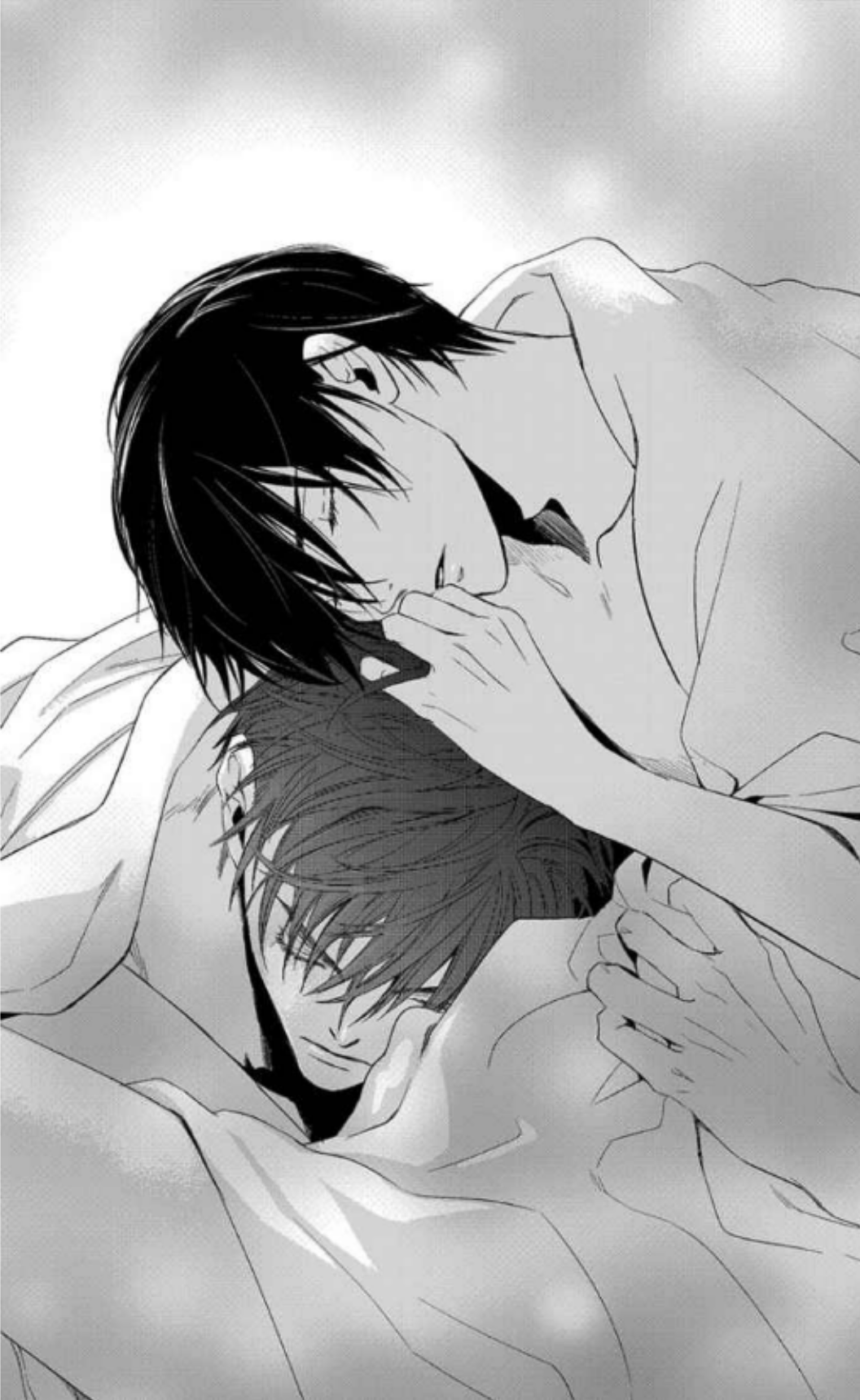 On the other side of that, Takahito was also happy about Arthur letting him see an unexpected, childish side of him…

As Takahito gazed down at the man who was motionlessly pressing his ear against his flat stomach, something deep in his chest began to twinge. A hot sensation gradually rose from there.

Up until just now it had been a ‘like’.

His feelings towards Arthur had been a romantic affection.

But now it was not just affection.

He felt himself surrounded by a feeling a level stronger than affection.

[T.N. These few paragraphs are hard to translate in English. In Japanese there are several ways to express romantic feelings with varying levels of depth of the emotion. In English we basically only have ‘like’ and ‘love’, and we often use ‘love’ quite casually so the impact of the words is not as great as it is in Japanese.]

Overwhelmed by the scorching thought his body collapsed forwards, and he embraced Arthur’s head.

At the same time as Takahito burrowed his face in Arthur’s hair, a new desire was born inside of him.

A desire he had not grasped up until now.

If perhaps he was able to, he wanted to grant Arthur’s wish. He wanted to leave behind the man’s genes in this world.

Even if after birth he was gotten rid of…even so.