As I warned previously this part ended up out a few days late because of my doctor appointment last week. It was a very hot that day and I ended up with almost a heatstroke by the time I finally got home late into the evening and it also turned out my case was a bit more serious than I thought.

I’ve had to buy so much medicine and lotions..and there’s still more stuff…utghh…I’m so poor now…..

Luckily my next money sucking appointment is only in the beginning of August, so everything should roll smoothly till then.

But that’s just some update, let’s get to the story~

He had probably incurred divine punishment.

After breakfast, relaxing in the lounge, Takahito’s ears caught the sound of an approaching car.

Rushing over to the lounge window, Takahito saw tall, well-built men climbing out of the four-wheel car parked in the entranceway.

When he saw the visitors, Takahito realized that the reason for Arthur staying over last night had been to hold a meeting with them. Because including Eugene who could not leave this place, they could only be a full set if they gathered in the ‘Forest House’.

Arthur and Eugene went towards the entrance to greet the guests, and Takahito followed after them.

Opening and entering through the door first, Edgar asked Eugene. In response Eugene answered in cautious tone “It’s all right at the present.”

Wolfgang, who entered next, looked at Takahito, and greeted him with a grinning face. Arthur pulled Takahito whose expression had quickly stiffened with his arm, and put Takahito behind himself. Seeing that, Wolfgang snorted.

Wolfgang’s attitude bluntly displayed that in his heart he did not think of it gladly, and Takahito glared at him from behind Arthur.

“Takahito, go up to the second floor.” 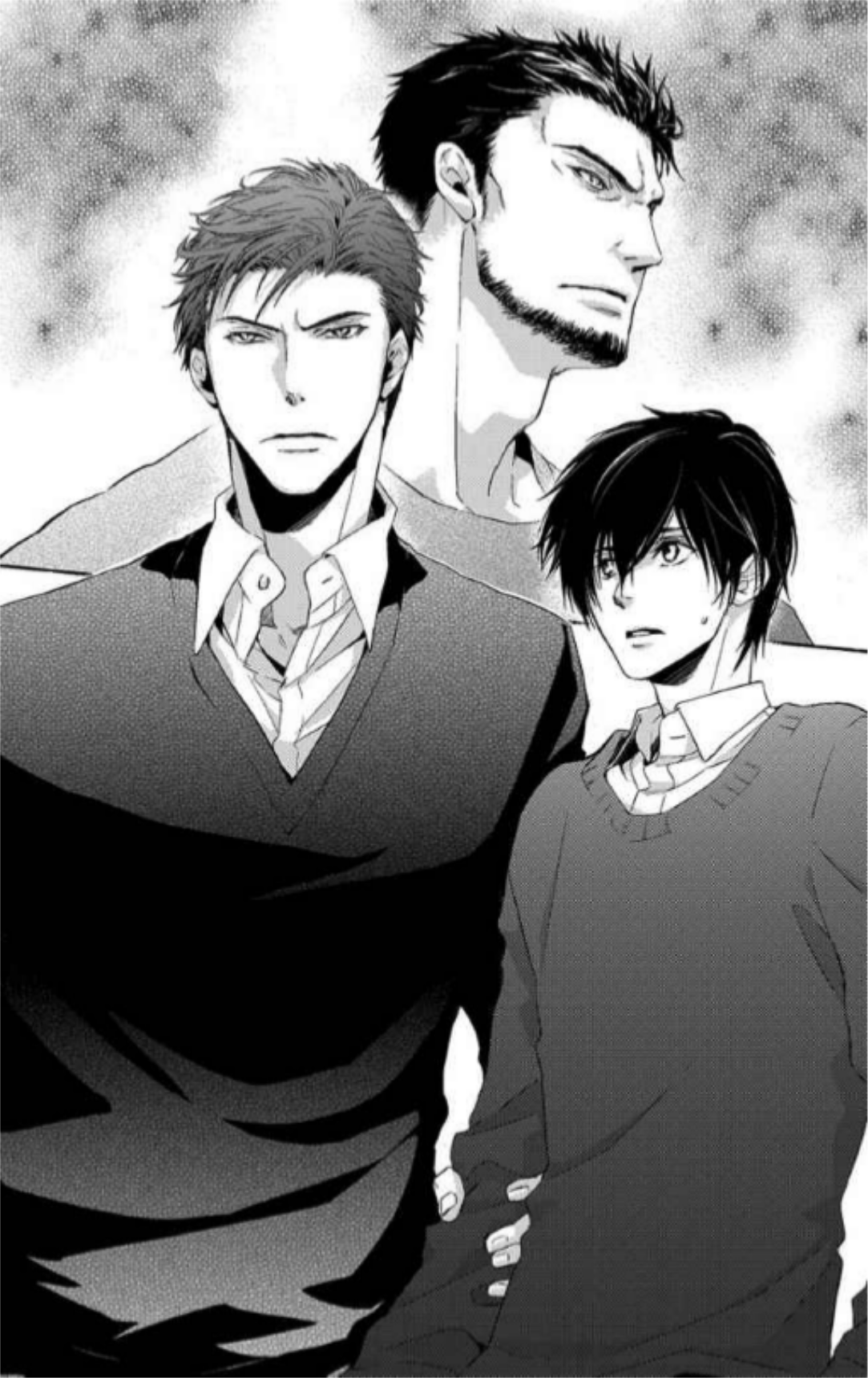 Arthur told him without turning around.

“Until I come to call you, you must not come down.”

Having been ordered strictly, Takahito unwillingly turned towards his room on the second floor. When mid-way on the stairs he looked over his shoulder, he could see the four people entering the lounge. Everyone entered and the door closed with a bang.

Turning around, he went back down the stairs.

He’d been told to stay in his room, but in all likelihood the subject of the discussion would probably be ‘him’.

He was anxious about what sort of discussion they would be holding, so he by no means could simply stay in his room quietly.

Silencing the sound of his footsteps he approached the lounge, and pressed his ear to the oak door. The bulky door’s soundproofing effect was quite good, but right now the closeness of the full moon had also made his hearing keen.

For a moment a feeling of guilt floated across his chest in relation to the eavesdropping, but immediately it yielded to his sense of curiosity.

“And? How about that brat? Has he conceived?”

It was Wolfgang’s voice.

The one who answered was Eugene. His voice sounded like it was oozing uneasiness.

Wolfgang raised his voice even more.

“Is that brat really an ‘Eve’? Maybe he doesn’t have the power to become pregnant simply by a male in rut?”

He pressed for an answer in a shouting tone.

“The one who suggested he was ‘Eve’ was you, Arthur.”

As if by a slip of tongue, in a low tone Arthur cut in. After pausing for several second that were packed with pressure, Wolfgang growled.

“That brat’s family is our enemy.”

“There’s no need to keep the son of our enemy alive. We should get rid of him.”

Arthur’s intimidation shook the air, and it became as still as death on the opposite side of the door. That the place was filled with tension could be felt even from the outside.

However, finally, as if pushing of the heavy pressure Wolfgang called out in a low tone “Arthur.”

“Could it really be that your feelings have been moved by that brat? Have you forgotten the humiliation those guys bestowed upon us 17 years ago?”

“It’s because Arthur did not participate in that attack.”

The one who had interrupted in a cool tone was Edgar.

“Edgar, what do you think?”

“In any case after the child is born we should probably get rid of him.”

Eugene raised his voice in reproach.

“It’ll be fine if we raise the child that will be born ourselves. Letting him live would instead increase the difficulty. We should pluck out the root of trouble beforehand.”

“I also agree to that view. Since even if we brought him back from Japan it is till troublesome!”

Wolfgang made his approval apparent in a merry voice.

A beginning for a rebuttal probably could not be found. Arthur and Eugene sank into silence.

Takahito quietly tore himself off from the door, and went back the way he came.

In his head, only the death sentence he had just been given resounded.

-“In any case after the child is born we should probably get rid of him.”

If he gave birth, he would be killed.

On the other hand, even if he did not, eventually he would be killed.

Gradually Takahito grew pale, his feet staggered, and he stumbled up the stairs. He almost fell down, but clung to the railing.

In any event, there was no way forward for him.

If he stayed here, he would just be waiting for death…

For the sake of surviving, he could only run away from here as soon as possible.

That’s it for chapter 8. One down already. Next time we’ll be moving unto Chapter 9. It should be up in a week.

In other news, I have made the Revised SNITIP E-book public on my Patreon profile. If you go down to the links, you should be able to reach my Patreon page, find the blog post and download the zip file.

That would be all, so see you in a week.