Muhaha…we’re done with Chapter 5…two more chapters left…Can you hear the slight note of desperation in my voice the closer to the end we get?

It’s not just me? Great.

As the evening got closer, a bundle of anxiety swelled in his chest.

Takahito fiercely regretted that earlier although only for a moment he had been irritated by Arthur not making an appearance.

Maybe because his stomach had curled up on itself he’d had no appetite, and had not been able to touch the meal Eugene had brought to his room.

He waited for the man’s visit with anticipation that was a mix of impatience and anxiety, but even though the sun had set and night had fallen, there was no sight of Arthur’s figure.

Eugene as well, what time Artur was going to come, he did not clearly know the time, it seemed. Since he’d received the notification ‘I’m coming over tomorrow’ yesterday, it looked like there had been no contact today.

According to Eugene, Arthur had a lot of duties as the head of the Gosford Family, so he was very busy. He had thought about saying that if that’s the case he did not have to force himself to come, but because it would be pointless even if he said it to Eugene, he had gulped down the words that had not reached his throat.

That Eugene had made an appearance in his room before it had hit 10 o’clock in the evening. “If you need anything, call me. I’ll be in my own room.” He’d retired to his own room leaving behind those words.

Since then an hour had gone by.

Sitting on top of the sofa while embracing one of his knees, Takahito intently glared at the clock on the wall.

11 o’clock had passed. In one more hour the date would change.

The man’s plans had probably changed. He’d probably had to finish urgent business and had not been able to come.

With a prayer like feeling, he tightly gripped his other knee.

Come here – that probably meant he would be here for that.

There was only one goal for that man who was fired up about his duty as the leader.

Just by remembering being taken by that man on that day, his back shivered. Because the shivers would not stop, these two days he had sealed off all memories of that day. Now that the seal was broken, his body began to tremble as if in anger.

Something like that happening again…he could not bear it.

Previously, thanks to still being immature, he had somehow avoided conception.

However, when he was embraced the next time, the chance of conception would not be zero.

Takahito himself did not believe that he was an ‘Eve’, but whenever he recalled the overwhelming confidence in the man’s voice, the identity he’d built in these 16 years was shaken. To that extent, Arthur’s words had that much persuasive power.

During this, without him being aware, his body had probably changed into an ‘Eve’.

After all because he did not understand the mechanics of werewolf transformation, even if something did happen it would not be strange.

His body being not his own, it was terrifying.

Coupled with a vague anxiety towards the changes in his body, and a pressing fear that the door would open at any moment and Arthur would enter, his heart made a turbulent thumping sound. His pulse quickened, and his heartbeat also got more rapid.

He no longer could be still, so Takahito rose from the sofa. He hectically moved around the open space of the room.

He walked around discomposed for about 10 minutes, but was unable to regain his presence of mind.

Although he was scared of Arthur who he knew not when he would come, he could not bear waiting any more than this.

Having suddenly crossed the limit of his patience, Takahito exited the room and entered the corridor.

So as to not be noticed by Eugene who was in his own room that was one room away from his, he stealthily stepped through the corridor and descended the stairs.

First he went towards the entranceway, but the door was padlocked from the inside. The padlock key was most likely in Eugene’s possession.

He looked for other escape doors besides the entranceway as well, but all the rooms on the first floor were locked, and there were iron bars on the windows in the corridor. The space between those bars was narrow, it would be impossible to slip through.

Furthermore even if for argument’s sake he managed to get out, it was dark outside and a thick layer of snow had accumulated. In his human form he would not last even 5 minutes before hypothermia set in, and like Eugene had warned it would be a route to a soon death by freezing.

Even if he ran, now was not the time. It would be after the moon got fuller.

Having for now abandoned his plans to exit outside, Takahito wandered the uninhabited first floor looking at least for a place where he could hide himself. While at it he also searched for a landline phone, but there was no sign of it anywhere. Some way or another it seemed there was no telephone line installed in the mansion. Eugene probably contacted Arthur by mobile phone.

The schoolbag, the uniform he had been wearing and the mobile phone that had been in its pocket had been confiscated when he’d been kidnapped, and he did not know where they were. The existence of a landline phone had been his ray of hope, but with this that vision also vanished.

Feeling disappointed, he continued to look for a place to hide himself. After a short while, he ran into a different stairway than the wooden one he had used earlier. Surrounded by stonework walls, it was a stairway downstairs.

(Is there a basement?)

As he ascended the spiral stone stairs, he collided with a metal door. Luckily, it was not locked.

Beyond the open heavy metal door, there was a 10 tatami (16.56200 m2) sized space. The air was damp and chilly, so despite wearing a gown on top of his pyjama, Takahito shivered.

Lighting a miniature light bulb that was on the ceiling, he took a look around the cellar, it seemed to be a room for storing provisions and wine. Unfortunately, there was no exit leading outside.

Behind a shelf stocked with canned goods and bags of flour, Takahito sat down.

Leaning against the stone wall, he sighed a little. Finally, his emotions had calmed down a little.

Doing this sort of thing was only buying time, he knew that.

For example, even if he managed to pull through this evening, he did not know if he would do it again tomorrow.

Nevertheless, for a minute, even for a second, he wanted to delay another meeting with that man.

Burrowing his face in his pulled up knees, he made his body as small as possible.

He wondered, how long had he crouched there motionlessly?

With the oscillation of the air in the cellar, Takahito’s shoulders shook.

Raising his that had been buried in his knees, Takahito cleared his ears.

Somewhere there was seemingly sad yet also full of a feeling of wildness call.

He soon realized that it was the call of a wolf.

As if delivered by his distant ancestors, it was a fervent, sonorous howl full of emotion.

Closing his eyes, behind his eyelids there appeared a figure with lowered ears and its nose pointed towards the far away moon.

Because of the beautiful howling sound that pierced the night, Takahito even forgot his current location and listened to it attentively.

More than any music he had heard up until now, this shook his heart.

While he listened to the transparent melody with rapt attention, eyes closed, his spine grew numb and heat gathered in the core of his body.

His skin flushed like it had been warmed by a fire, and faint tears spilled from the corners of his eyes.

He had never howled himself, but he had heard his uncle and mother do it.

However, this was the first time he felt his heart was stirred up like this.

His chest trembled, and for some reason he felt like he wanted to cry…

His heart was suffocating, sweetly aching, and when he noticed that he tightly gripped the edge of the sleeve of his gown with his hand.

(This sort of…this is the first time)

As he was bewildered by the sensation he was feeling for the first time in his life, suddenly the howling stopped.

After a pause for a short while, he was immersed in the lingering memory of the plaintive howling.

Just now, his heart had been in resonance with an unknown wolf.

Up until now, the one he’d been in synchronisation had always been the one born and raised together with Kizuki. But despite that…

(It was almost…like I was being called) 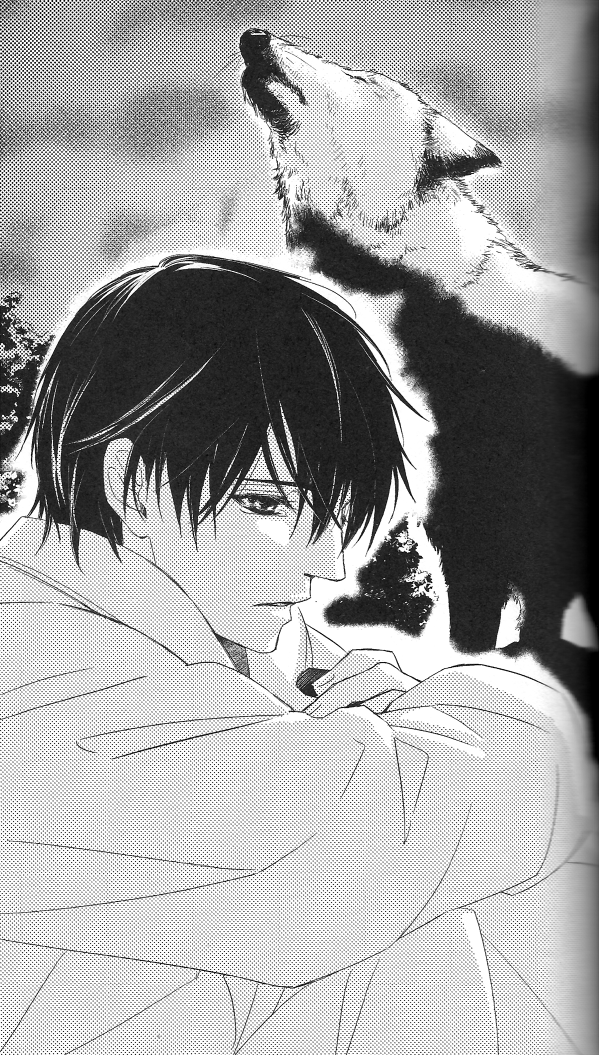 Like the wolf was asking, where are you? Answer me right now!

As he was ruminating on the wild calling like he was trying to digest it, Takahito captured a strange noise in his hearing.

The sound of footsteps of someone descending the stone stairway.

Before long the footsteps stopped, and with a heavy sound the door opened. And closed with a banging sound.

His heart began to run.

Takahito muffled his breath and shrunk his body.

The sound of shoes hitting the stone floor came closer. Almost, as if knowing of Takahito’s location, the person moved straight with no hesitation in his steps.

At last the sound of footsteps stopped, and a large silhouette stood in front of him.

To make sure of the true identity of the shadow hanging over him, Takhito timidly raised his head.

Even in the useless backlight, still he could clearly discern the details of that finely chiselled face.

Takahito opened his stiff throat, and called out in a hoarse voice.

Ahh, ok less than 100 pages left to translate~ 6th chapter is like 50, and like a third of it needs to be translated together (It’s smut) – the next part is gonna take a while longer.

On the other hand, the 3rd chapter of my original MxM novel Demon-Lord’s little bride is out: here.

Anyways, see ya in a while~

If you want to support this project, consider donating to my ko-fi~ I go through a lot of drinks working on this, a LOT of them.