The first chapter. It’s the shortest of the chapters I’ve written, since it doesn’t cover a whole lot, which is why I had considered combining it with the prologue, but I do like the prologue – epilogue setup, so I didn’t. All the further chapter are much longer. I’m trying to stick to at least 2k per chapter, though the longest I’ve written is about 7k.

The history of how a Demon-Lord came to reside in the prison underneath the Chapel of the Holy Maiden is a long and complicated one that can be traced centuries into the past. Long, long ago the Holy Empire had been a fraction of its current power and size, and not the overwhelming giant of today.

One of the major forces that had held back the Holy Empire from extending its long arm over the surrounding countries was the bustling demon population.

The demons were a very savage race renowned for their battle arts. Their home was a region known as the Dark Marsh, but many demons had also settled into various other human countries, and often times even served in the local military. It had actually been a popular practice of rulers at the time to hire mercenary groups of demons to defend their own country, or aid in battle against another.

Although parts of the demonic society had always been shrouded in mystery, everyone knew that at its top sat the Demon-Lords. The demonic hierarchy was based on the rule of the fist, and theirs was the heaviest. All demonic beings were born with some aptitude in magic, which made them a fierce foe in battle when combined with their often times overwhelming physical power, but the inborn aptitude for magic that the Demon-Lords had far surpassed every other demon’s. As such, since ancient times, every demon paid obedience to the Demon-Lords who ruled over them as unofficial monarchs.

The relationship between the two major forces – the Holy Empire and the Demon-Lords at the Dark Marsh – was, of course, strained. Like fire and ice, they stood on the opposite spectrums of the board, held at bay by their evenly matched strength.

The cause of the war remains lost to history, but it is known that the Holy Empire lead a crusade against the demon population, especially targeting the Demon-Lords. The Demon Lord population had always been extremely small, but they were the core holding all the demonic races together, which the Empire knew very well. Using an unknown method, they were able to exterminate almost the entirety of the existing Demon-Lords. The remaining ones had gone into hiding and became hunting targets of the Empire for centuries to come.

The demons, on the other hand, had broken into disorder without their leaders to guide them, and had slowly scattered like the wind. The Dark Marsh, ironically, became even darker and drearier than they had been before, a wasteland full of hidden dangers.

Those were the events of a time long past.

As far as rumors went it was said that this Demon-Lord was the last of its kind. That he had been captured and imprisoned by the Imperial Army so many years ago that nobody present at that time was still among the living. Everyone in the Holy Citadel knew of his existence though it was never spoken of above whispers. Nobody also knew why the Demon-Lord had been kept alive all this time by the numerous Holy Maidens that had come and gone during his imprisonment.

Some suggested he served as the trophy of their victory against the demons, others said that they were simply unable to kill him, the method of killing Demon-Lords having been lost. But still there were also those who whispered that there were some dark secrets behind it.

But as far as Adriel was concerned, it did not really matter why the Demon-Lord was kept here in this dungeon, as it would not change his fate in any way whatsoever.

By now, as Adriel had been ruminating over all the info he knew about the Demon-Lords, the guards had activated the locking mechanisms on the large door, and it had opened. Caleb went through it straight away, but Adriel could not help faltering for a step in hesitation, before Caleb turned around and commanded him to follow.

When he crossed the door he felt another barrier pass over him while the doors slowly closed behind them. However, this barrier was way weaker than he had expected, which confused him. He clearly knew Demon-Lords were supposed to be extremely gifted in the ways of magic, so shouldn’t it be easy for him to break this?

Knowing he won’t be able to come up with any answers, Adriel instead choose to observe the room they had entered. He could not describe it in any other way but as opulent for a prison. Of course, it could not match the extravagance of the main rooms upstairs, but it was far fancier than any rooms Adriel himself had lived in.

It was obviously a sort of small sitting room. The table and chairs in the middle of the room were made from dark, sturdy wood, and the chairs were padded with a dark red fabric. There was a carpet underneath their feet, and Adriel could see strange patterns he had not seen before on it. There were bookcases put against the walls, most of which were filled with books and a variety of knick-knacks.

Adriel took a glance around the room surreptitiously, but there was no sign of the demon. He did, however, notice another set of doors that he was sure lead to a bedroom. He saw Caleb going towards the door, and followed him meekly.

Just as he had expected the next room was a bedroom. As they entered, he tried to keep his head low and stay behind Caleb, but he was startled by a deep, amused voice.

“How nice of you to visit Caleb. And I see you’ve even brought me a new toy?”

Adriel raised his eyes to the large bed right in front of him and froze. There, laying on the bed sideways was…a creature the likes of which Adriel had never seen before.

He was even larger than Adriel had imagined. And way more human looking.

His skin tone was a dark grey, unlike a human’s, but all his limbs looked the same. The demon was not wearing a shirt, so Adriel had a clear view of the deep abdominal and pectoral muscles as his gaze rose up to the demon’s face. The facial features were all human as well. Well, except for the eyes. They were entirely black, with a deep red iris as the only point of color. It was the same red as his hair that was loosely braided and hung over the demon’s shoulder. There were no horns or a tail as far as Adriel could see.

But what he did find strange was that there was a thick gold collar around the demon’s  neck. It looked mighty uncomfortable. A bright blue gem was inlaid on top of the collar, glittering in the candlelight. He could also glimpse strange writing on it. He could not even guess at what purpose the collar served…

All in all the demon was not the terrifying beast Adriel had been imagining in his head. Instead, he was probably the most impressive male Adriel, who had always lived amongst the fairer looking humans, had ever seen.

He had been so distracted by the sight of the actual infamous Demon-Lord that the sound of Caleb’s voice calling for him felt like a stab in his ears. He hurriedly took his gaze off the large male demon, and approached Caleb to stand next to him.

Caleb stopped for a moment, like he had finally realized he had not asked Adriel his name. He then turned to him and asked, “What’s your name?”

Caleb then immediately turned back around like nothing had happened. Adriel thought that, for a second, he could catch a glimpse of a smirk on the demon’s face as he gazed at Caleb.

“Right, this is your new servant Adriel. He’ll be starting work this week. Please try to not kill him off too fast.”

The demon’s gaze then switched to Adriel, and he felt like a thousand pinpricks were stabbing his skin. The intensity of that gaze was oppressive, but it lasted only for a second before the demon moved his gaze away, seemingly disinterested.

Adriel hurried to take a bow to show his sincerity. He was here now, and he had to make the best of it or he would end up dead sooner or later in all probability. Which meant not offending The Demon Lord that could probably split him in two with his bare hands.

There was no reaction from the demon, but Adriel himself felt safer having done this. He did notice Caleb giving him a queer look, but did not pay it any attention.

“Right…come on then. I’ll show you your duties now. Then we can leave.”

Caleb then proceeded to show him around the 3 room prison cell of the Demon Lord, and explaining all the things that he will have to do. It felt very mundane, despite the circumstances, but all through the process he could not help feeling as if there were eyes on his back, watching his every move.

And so we meet our ML, the Demon-Lord. I’ll let you on a secret…he might look like a badass, but he can be a really big softie~

Here’s a sketch of him: 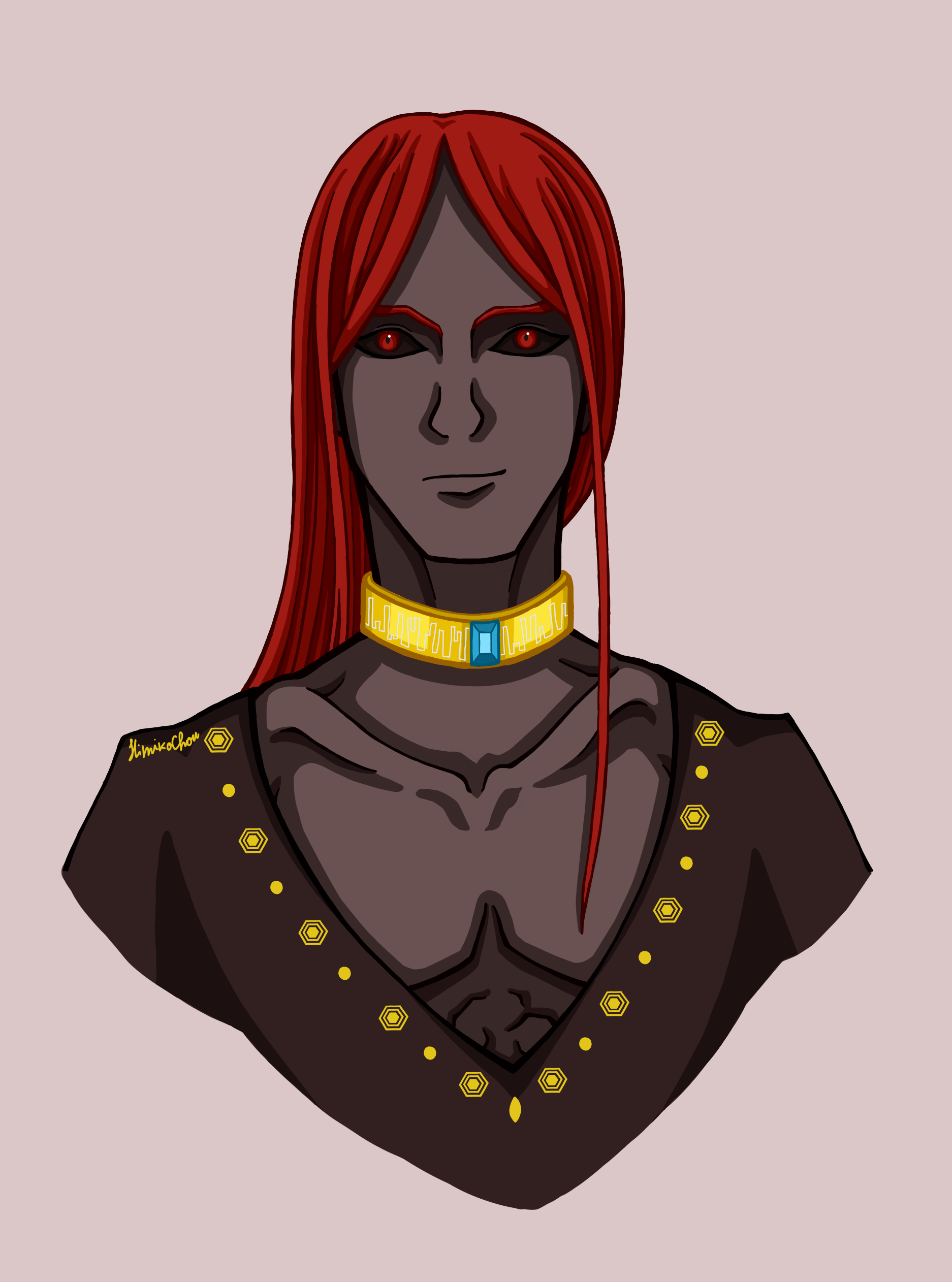 I’ll post Chapter 2 in a few days as well, it’s where the meat of the story begins.