Yo! And so the family drama comes to an end…

The air froze at Takahito’s proclamation. No matter which face it was reflected in his gaze, it had stiffened as if the person had been taken by surprise.

“Takahito…you, what are you saying?”

His uncle interrogated him with a stern expression. Being steadily stared at by that uncle of his, he made himself stand up so as to not lose and be pressed down by his uncle’s leader like power of observation.

“I will stay in UK and live together with Arthur and Eugene.”

“Are you being serious?”

“I’m sorry,” he apologized to his uncle whose low tone oozed anger.

“Although you guys took the trouble to come here for me…I am really sorry.”

Next Takahito turned towards his parents. The two, who were lost for words, he informed them of his feelings.

His mom and dad gasped at the same time. Everyone else also gasped in wonder.

“When I met Arthur I entered my heat. That was because Arthur is my fated ‘pair’.”

“Dad and mom’s meeting must have been the same. The moment you met you felt a special ‘scent’ and could not help being drawn to each other…right?”

His mom emitted a short groan, and covered his mouth with his hand. His dad looked somewhat dumbfounded.

When he saw the two’s state, his chest ached crushingly.

After he suddenly disappeared, they had been wrought with worry all throughout this up until they came here and must not have had the leisure to rest their spirits for a long time.

The happiness at being able to reunite at last was also brief, they were betrayed like this, he could imagine how shocked they were.

They had brought him into this world and had raised him by freely with all one’s might pouring affection unto him.

No matter how much of a hopeless situation it might have been, they had believed in his safety and had come to take him back.

He was turning his back towards that affection, and now was about to sever those ties with his blood relatives.

(This is ten times more painful…than what I had imagined)

Because of the feeling of guilt it felt like he wanted to vomit. His bloodless body was assailed by ripple like convulsions.

As his pale face shivered, one of his hands was surrounded by something warm.

Incited by the warmth he turned his face to the side and met Arthur’s one eye.

Squeezing Takahito’s hand, Arthur powerfully nodded as if encouraging him. After he had tightly squeezed it he released his arm and once again turned towards Takahito’s parents.

“I love your son. To me Takahito is my one and only ‘pair’.”

At Arthur’s grand statement, Takahito felt his chilled body coming back to life.

“I will definitely make him happy. I will take over giving him the affection his parents and family have shown him, and I swear to protect him for the rest of my life even if I have to substitute my own life.”

His parents both kept their silence with stiff faces. Takahito imagined their heads and emotions could not catch up with the sudden developments.

His uncle, grand uncle and Tsuzuki were also silent as if they were guessing at how they should deal with the situation that had unexpectedly arisen.

Suddenly, the gloomy silence was broken by an angry voice.

His face having become red, Kizuki raised his voice.

“I can’t understand you choosing this man over your relatives, your family!”

The brunt of Kizuki’s anger was naturally aimed towards Takahito.

Grabbing hold of both of Takahito’s arms, Kizuki strongly shook him.

“Why are you throwing us away?”

They have been together since they were born. His other half that understood him better than anyone.

His older brother that was another version of him.

He was trying to separate himself from that brother as well.

(However…I cannot go back to that place anymore.)

…because he had met him…

Because he had discovered his one in a lifetime fated love.

Hanging his head dejectedly, Takahito apologized. Not being able to comply with his older brother’s wishes, he could only apologize to him. 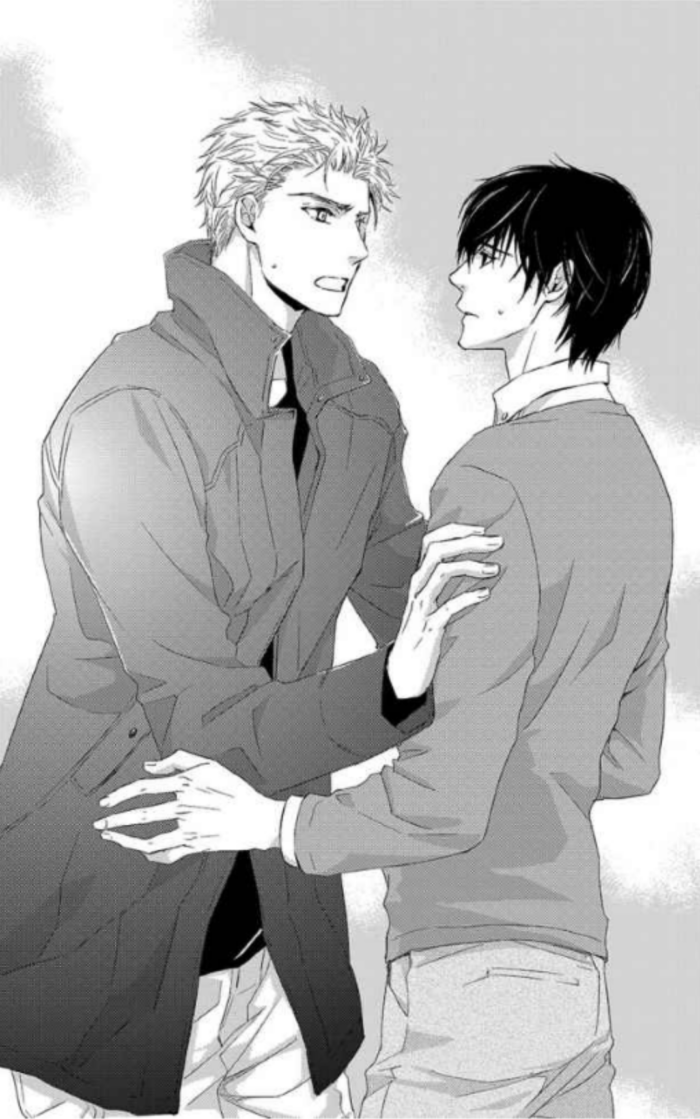 “You think apologizing will cut it!?”

Raising his head, Takahito appealed to him.

“This does not mean I’m throwing you away. Of course, even now you, dad, mom…everyone is important to me. I love everyone. However…I can’t return to Japan.”

“For Kizuki too…there will come a day when you will understand.”

“I don’t understand! I don’t want to understand that sort of thing…”

“Takahito has met his ‘pair’.”

Tears spilled from Kizuki’s eyes at his uncle’s admonishing manner of speaking.

“I also have experience with that – it’s a special meeting that you can only have once in your life. Once the ‘pair’ meets they are tied together by a firm connection. Family bonds and even the bond between a parent and child, they cannot content against that strength.”

Maybe because it was a road he himself had crossed, his uncle’s words had persuasive power.

The figure of his older brother, whose fists quivered because of anger that had no place to go, gradually became blurred within his vision.

Most likely, having seen the strong bond between their dad and mom and their uncle and Tachibana, who were a ‘pair’,  since childhood, Kizuki also understood that there was nothing that could be done…but even so he thought it vexing.

How long has it been since he last saw Kizuki crying?

During childhood the two of them had cried often. If pushed he’d say Kizuki had been a crybaby, but unnoticed his older brother’s trademark had become his smiling face, and he no longer saw that crying face.

“The two who live in places far apart that are separated by the ocean, they have accomplished a miraculous meeting that ordinarily could not happen. This is a fated thing. We can only…bless them, I guess.”

His uncle muttered in a tone that spoke of his heart accepting the truth. His grand uncle pondered with a grim expression for a short while, but at last he opened his heavy mouth.

“…You are the leader, Takao. I will obey your decision.”

Standing next to his grand uncle, Tsuzuki spoke out in a disagreeing voice.

“Takahito-san is one of the important successors of the Jinguuji Family. Is it fine to decide such a significant thing right now and here?”

Being the only one amongst the six not connected by blood, Tsuzuki’s appearance was composed, not letting his emotions overflow.

“Shouldn’t we take Takahito back to the country for now, and clearly discuss it with Tsukiya-san also joining in?”

“Arthur is currently heavily injured. I do not wish to leave his side.”

“At any rate, let’s temporarily return back home. Since as result of the discussion, you’ll be able to come back to England again.”

Sensing that if he did that he would never be able to come back, Takahito shook his head left and right.

Tsuzuki made a grimace. With an expression like he was looking at a temper tantrum throwing child, ha called out “Takahito-san.”

“Since you are no longer a child please be reasonable.”

The one who had intruded on Takahito’s and Tsuzuki’s conversation was his mom.

“Even if you forcefully separate a ‘pair’, they will only grow weaker day by day.”

“17 years ago when I too was separated from Shirou, food did not pass my throat, I slept shallowly…I was just like a doll that only breathed. If Shirou had been late in coming to pick me up a few days later…I do not know what would have happened.”

As if remembering his mom’s state at that time, Tsuzuki fell silent.

“I do not want to let Takahito experience the same thing as I did at that time. I too am asking you for that.”

Tsuzuki pushed up the frames of his glasses and sighed.

“Even I understand that it’s the most painful for you – his parents. If you, who gave birth to Takahito-san, allow this…it can’t be helped.”

Takahito was drained of strength by the excessive relief.

Once again he bowed his head to everyone and as last thanked his mom who had pleaded for him.

His mom was moved to tears, and his dad embraced his shoulders as if comforting him.

Right after he said his apologies, the tears he had been supressing for a long while suddenly spilled out. He and Kizuki hugged each other and cried.

While feeling the worried gazes of his new family, Arthur and Eugene, at his back – Takahito continued to cry into the chest of his older brother like a child.

Only one chapter left. There’s 6 parts to chapter 13, including the last NSFW scene and an adorable little end scene that’s gonna make you go ‘AWWWWW’.

If you like my work consider supporting me on ko-fi for a one time donation or become a Patron and get early access to loads of chapters of my projects as well as help keep the updates regular!