This first part is a freebie. The rest will be updated at least weekly on Patreon until TATEV has been completed on the blog, and then be updated here as well.

This is the first book from the same series as Affection. Your chance to meet Takahito’s family and their love history. 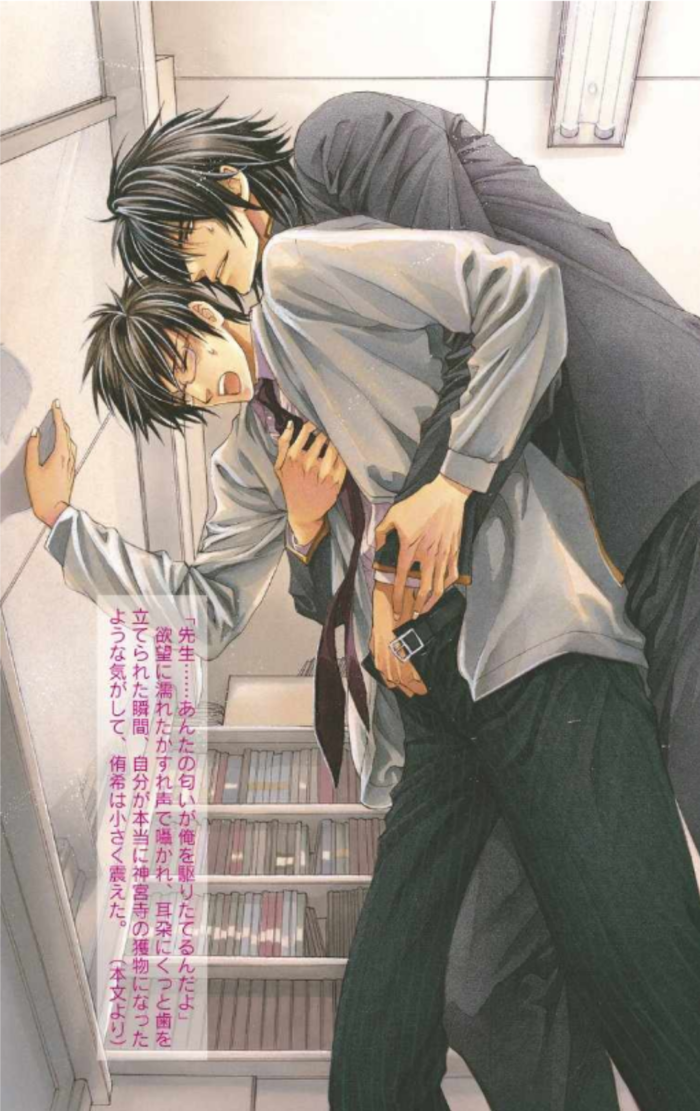 [T.N. Names are given in the Japanese order – Surname first, then Name.]

[T.N. Everybody is probably familiar with it, but ‘sensei’ is a respectful suffix attached to a person’s surname. It is used for teachers, doctors, writers etc.]

When his name was called in a hoarse voice as it tended to be, for some reason or another, he had a bad feeling.

As he moved his gaze from the computer on which he had been typing his lesson plan bit by bit, Kondou, who had come to stand near him before he even noticed it, asked him, jerking his angular jaw.

Having turned off the computer in a hurry, Tachibana Yuuki drew back the office chair and stood up. No matter how much of a bad premonition did he have, as a person in a lower position it was impossible for him to reject the summons of the head teacher.

[T.N. Like he is the teacher in charge of all classes for the school year? I’m not too sure on the details as I’m not that familiar with Japanese education system.]

“My first class is at 3rd period.”

Having checked what time it is with his wristwatch, Kondou began to walk with his jutting out stomach slightly swinging along. Following after that big frame, Yuuki too left the staff room. Even though he kept the gray-suited back about 50 centimeters in front of him, while he walked through the corridor, behind his glasses Yuuki’s eyes flickered in uneasiness.

What did the head teacher himself want to speak about? Since they were changing the location on purpose, it had to be something he did not want the other teachers to hear?

Was another unreasonable demand going to be pushed upon him?

Just last month too, he had been pushed to become the advisor of the handicraft club in place of a female teacher who was on maternity leave. On top of already having accepted being the advisor to the association of people interested in railways, and regardless of the fact that, of course, he had never done any handicrafts, it had been decided by a few words from the head teacher “I’m asking you, Tachibana-kun.”

You could call it a discussion, but from the start there is no option for him to refuse. And yet, was the cultural club still being considered?

This time too in any case the problem did not seem urgent, as he could gather from the behavior of the man walking in front of him.

In his heart Yuuki stifled a sigh and glanced outside through a window in the corridor.

There were still light traces left of the snow from yesterday, and below on the slightly cloudy grounds male students were playing soccer. Just by seeing their lingering white exhales and their figures clad in shorts, he felt chilly.

Every time he saw physical education classes in winter, he felt thankful he was no longer a student. However, that was practically the only thing that made him think he was glad to be an adult.

This place that was located in his hometown——-‘Meikou Academy’ had its 60th anniversary in April of this year, and was the private high school with the richest history in the ward.

It extolled both literary and military arts and the rate of students who have entered famous universities was high,  and in particular when it came to sports there were a lot of students enrolled who participated actively in inter high school competitions.

Strictly speaking, students are split into a sports program a program for those entering University, but there were a lot of schools who used this strategy – creating a so called sports scholarship to boost their brand image. They were, so to say, the living billboards of the school. These days, were the decreasing birth rates are considered a growing problem by the Diet, the fight for survival between educational institutions is frantic.

It had been 4 years since Yuuki, who had graduated from a University’s mathematics department, had started to work as a math teacher at Meikou Academy. Starting from the spring of last year, he had been teaching first year senior high school students and had taken charge of A class as their assistant homeroom teacher.

The male students wearing the black stand-up collars that were coming from the opposite side of the corridor bowed their head to Kondou as they passed.  However, they only glanced at Yukino from the side and passed him by without taking any action.

It had always been like this, so Yuuki was not perturbed and Kondou did not say anything either.

He knew he was not an object of respect and fear for the students.

On the contrary, secretly they looked down upon him…

His standard off-the-rack suit and silver rimmed glasses, even he himself thought his looks were dull. Not unrelated to not having an active outdoor life due to his weak reflexes, his skin was pale all year-round and because of weak digestion his body was also thin – his only feature if it could be called a feature was that his frail legs and arms were long.

He was aware that because his face was small and his facial features delicate, he lacked force and had not a wisp of the dignity of a teacher. He had thought that at least he had his height, but sadly this too was below average.

However, his outer appearance was probably not the problem. Or perhaps he should say as for his disposition, truly the part that had to do with people was not cut out to be an educator. He did not possess the leadership skills and broad-mindedness to guide or educate someone. In the first place, he did not have the ability to unify and lead large amounts of people.

Sure enough, his pupils had seen through him and had made fun of him for his weak will, and his fellow teachers too made light of him, calling him “an inflexible math nerd.”

[T.N. In original they actually call him ‘math otaku’, but in the west we probably think of otaku as more a manga/anime fan than just a nerd or geek.]

In reality, he was bad at socializing so he could not make decent conversation, and since he did not drink or smoke, he thought it could not be helped that his colleagues backbit him, calling him “A stiff guy who did not enjoy anything.”

While he had given various reasons to decline, lately the afterschool invitations that had been made to him had also suddenly become less. In such a case he could avoid the drinking parties that he disliked with relief, but…

When he had thought up to this point absentmindedly, Kondou who was walking in front of him stopped.

At the end of the corridor on the second floor there was door with a plate ‘senior staff room’ sticking on it which Kondou opened with a key. The head teacher of the year who was a candidate to become the vice principle next year and was a highly popular go-getter, had his own private room rather than a desk in the teacher’s room.

Opening the door and stepping foot into the 8 tatami mat (13.2496 m2) sized room, Kondou immediately sat down on the small lounge set on the right side. He offered Yuuki a seat on the sofa opposite him.

Sitting down opposite him, as Yuuki put his hands on his closed knees and waited, not a long time passed before Kondou got the ball rolling.

“In truth, what I wanted to speak to you about was Jinguuji Takao from your class.”

The moment that name was spoken out, his heart hammered.

So this was about the matter with Jinguuji——?

At once in the back of his mind there was a beautiful face tinged with a hint of wildness. Arrogant eyes that overpowered and glared at everyone around him from up above. Yuuki could recall as only once before those jet black eyes had gazed at him with a look in his eyes almost as if he was gazing at an insect.

Of all things, having his most shameful spot poked, Yuuki softly gritted his teeth.

“He hasn’t come to school for close to a month, right?”

“That’s…right. Since his truancy began from the beginning of December, with the winter break in between, it will be about a month soon, I think.”

Enduring the turmoil in his heart, Yuuki nodded.

“And until that point, although you could not say he did it diligently, he had attended school reasonably, right?”

“Yes. When he did feel inclined to, although…it would certainly be rare for him to come in the morning.”

Despite such careless attitude the school did not regard it as a significant problem and up until now had given him free rein because he was this Meikou Academy’s rare student.

“No matter what we say, he is not just a normal student, ah. On top of getting first place in our entrance exam, he also has such reflexes.”

Kondou withdrew a packet of cigarettes form the breast pocket of his jacket, pulled out one and tapped it against the low table.

Yea——that was where the problem with this student called Jinguuji Takao was.

The first chapter is pretty much all exposition as with other Kaoru-sensei’s work, but the action picks straight up in the 2nd chapter and there’s quite a few nice explicit scenes.