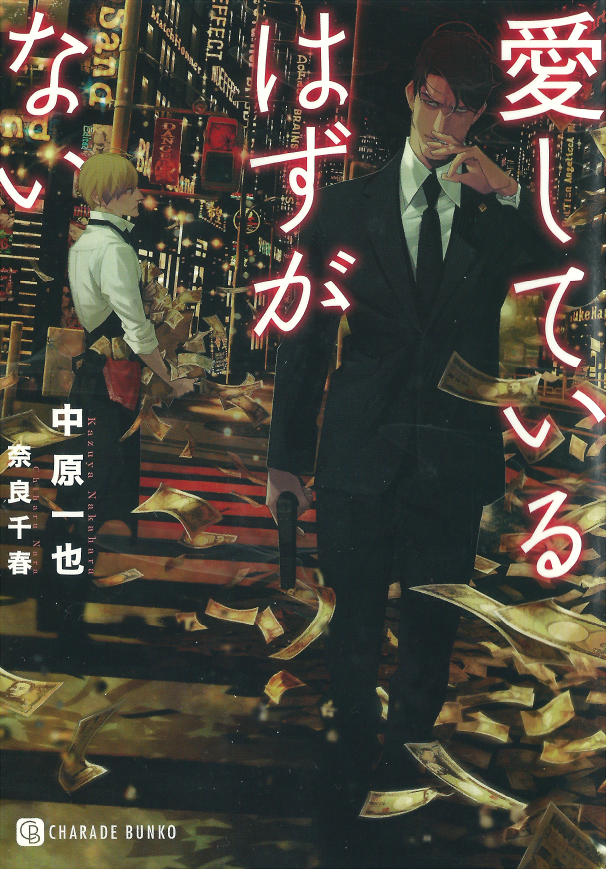 It Is Not Apparent That I Love You （愛しているはずがない）

“If you betray me, don’t think you can have a decent death…” a night full of rain. Yuzuki was picked up by Madarame. Since he became the lover and aid to the young leading subordinate of the Wakata Group [1] Madarame, who leads an exceptionally successful life, five and a half years have passed. He was taken with the intense darkness that Madarame is clad in and oppressed by the animal like sex that made Yuzuki’s body heat up. However, knowing the existence of a man Madarame has been obsessing over for the first time, inside of Yuzuki there boiled a twisted desire to see Madarame’s ruin…

[1. 広域指定暴力団誠心会の二次団体、若田組 (Wakata Gumi) – I know shit all about Yakuza structure, but from what I understood 広域指定暴力団 refers to a Yakuza group that has influence in more than one city prefecture. I however do not know what 誠心会means, could be the main groups name, otherwise I’ve no idea what sincerity has to do with anything. 二次団体 probably refers to branch of the organization but I could be wrong very easily.  Feel free to correct me.]

P.S. I have not read the story yet, so I don’t know if I’ve translated the summary correct. The last sentence was very difficult to understand, when you’re not completely fluent. And as context plays an important role in translating, I might have to correct the summary at some point when I get around to this novel.

3 thoughts on “It Is Not Apparent That I Love You”