School’s been…interesting…made me realize how bad I actually am at Latvian. Sad.

I’ll still be holding to a once a week uploading schedule for now. I’ve started translating Tengu for Patreon, and switching author’s has been harder than I imagined. I miss Iwamoto-sensei’s Japanese that was super simple most of the time. Amano-sensei loves ocassional bizzare three row long sentences that give me headache.

Right now again, like raging billows he was overwhelmed by waves of violent emotion just like that time, and in the blink of an eye he was swallowed deeply.

Arthur raised his right arm, and touched the crying Takahito’s cheek. He nuzzled his wet cheek against that large palm.

While he was feeling the warmth of the palm, his sobbing calmed down little by little. Blinking his red eyes and sniffing, Takahito laughed a little to hide his embarrassment at having cried like a child.

Seeing that, Arthur removed his hand and tried to raise his upper body.

As Takahito hurried to stop him, the man strongly replied “I’m alright.” Because he understood that the man had a stubborn personality that meant he would not listen even if Takahito suggested something, there wasn’t anything he could do about Arthur getting up so he put a pillow behind Arthur’s back, and adjusted it so that Arthur could be at least a little bit more comfortable.

“Will you drink water?”

He poured mineral water from the water jug into a cup and handed it over. After he had drank that water up as if it was something utterly delicious, Arthur sighed. Maybe because he had raised his body and drank water, his features were considerably tensed.

It seemed like he wanted to try to learn what had happened during the time he had been unconscious. On top of grasping the situation, he was probably thinking about what he should do now.

“What became of Wolfgang?”

Answering like that was painful, but he could not lie.

Two days ago, together with the injured Arthur they had picked up Wolfgang’s corpse and had brought it to the ‘Forest House’ by car. After Eugene had finished treatment and Arthur had entered a deep sleep, together with Eugene the two of them had buried Wolfgang in the rear garden.

If he had died in human form, he could have been buried in the Cotswold cemetery where the Gosford family slept, but since that was not the case there was nothing that could be done about it.

Hearing Takahito’s explanation, Arthur muttered, his expression as if he was mourning for his lost packmate “…I’ve caused you both a lot of trouble.”

“Has Edgar made an appearance since then?”

Takahito shook his head at that question.

“Edgar will probably not return again.”

Seeing that he had aimed for Arthur’s life, Edgar probably understood that he could not remain in the pack as a beta and had left.

Edgar has become a stray wolf. Whether he would stay in UK or move to another country, his future already could not be known.

Wolfgang had died, and Edgar had separated from the pack, with this there was only Arthur and Eugene remaining in the Gosford Family.

Takahito broached a hard to talk about matter.

It was painful to sink his boot into Arthur who had in addition lost various things, but it was impossible to not speak of it.

Even though he hesitated, he spoke the cruel truth.

However, unexpectedly Arthur replied in a light tone “That seems right.”

“Luckily I have one eye left. It doesn’t mean I’ve lost my eyesight. I’ll probably be more or less impaired for a short while, but I’ll soon get used to it.”

After he had smoothly declared as if it was a trifling matter, he spoke in a renewed tone “Leaving that aside.” He fixedly stared at Takahito with his one remaining eye.

Takahito’s heart was shaken by Arthur who had murmured as if in reflection.

His life, which Arthur had protected in exchange for one of his own eyes.

That life – he wanted to devote it to Arthur.

As if overwhelmed by the hot sentiments that welled up in the depth of his chest, Takahito stood up. He suddenly spouted out the wish he could no longer supress.

Arthur made an expression as if he had been attacked in an unguarded moment.

Arthur widely opened his remaining right eye. Drawing closer to Arthur, who could not hide his bewilderment at the sudden proposal, Takahito once again argued vehemently.

“I want to create a family together with you. Unite the blood of the Gosford and Jinguuji families, and connect them into the future…that’s the sort of family I want to create.”

“I want to become your eye. Becoming your left eye, from now on I want to forever support you.”

Takahito fervently appealed to him, but it did not appear that Arthur’s heart was moved.

If he had to say Arthur’s expression was gloomy as he opened his mouth.

“Takahito…about this eye, you don’t need to feel responsible for it. Wolfgang’s case too, it was a hegemony dispute among packmates. Rather, I think I have to apologize for involving you into our family’s quarrel.”

Those words made him realize.

Arthur thought it was a proposal made out of a feeling of guilt.

Denying it in a loud voice, under the impetus Takahito confessed “I like you.” Staring straight at Arthur’s face, he repeated in an earnest voice.

Takahito guessed that he had conveyed that he was being truthful. Arthur’s expression moreover turned surprised at that.

“Since I’m years apart from you, I’m also a man and a person from a family opposing yours…I understand that you don’t think of me in that way. I also understand that if I am not an ‘Eve’, my existence can only be a risk to you. …nevertheless, I like you.”

“If my existence is only a risk to you…I have to give up…I should give up is what I thought many times. For the moment I was resolved to return to Japan. But in the end it unfolded like that…when I thought I had probably lost you, I was really so scared I was shaking. That moment, I realized that to me losing you was the same as my own life coming to an end. That’s why I’m no longer giving up. I’ve also stopped forcefully repressing my feelings. I…”

Spitting out all of his feeling that were bursting forth, both of Takahito’s arms were grasped by hands that suddenly stretched out, and cut off his words. His caught arms were pulled and he was tightly embraced.

Silently embracing Takahito, shortly Arthur loosened his hold and let go of the hug. Gazing at Takahito’s eyes he whispered.

“For your sake I thought returning you to Japan was the best option, but…”

Arthur suddenly smiled, and spoke as if having become unbound.

“I no longer have anything to protect to the point of deceiving my own feelings. Right now I will be honest to myself.”

“I too cannot give you up.”

Arthur told him with a sincere expression.

“Even if I turn the whole world into my enemy, surmounting all difficulties, I will make you mine.”

At the powerful proclamation, great joy suddenly descended upon him.

Arthur too held him in regard. The man thought of him with desire…!

Once they had been resigned to parting, and had overcome the danger to Arthur’s life. For this reason the joy at having communicated their feelings was great.

Takahito was embraced by Arthur. Once again being held tight by the burly arms, a feeling of happiness he had never felt up until now rushed about his body.

While he was enveloped by the dazzling delight, Takahito realized.

Arthur was his one and only fated ‘pair’ in this world.

[T.N. Hallelujah!!! Bring out the confetti and the fireworks – Takahito finally got a clue!!! I never thought this day would actually come…I feel tears of joy dripping from my eyes…XD]

As proof of that from the moment they had first met, his body had reacted to Arthur’s ‘scent’.

Although they were also werewolves, he had felt nothing from Wolfgang and Edgar. 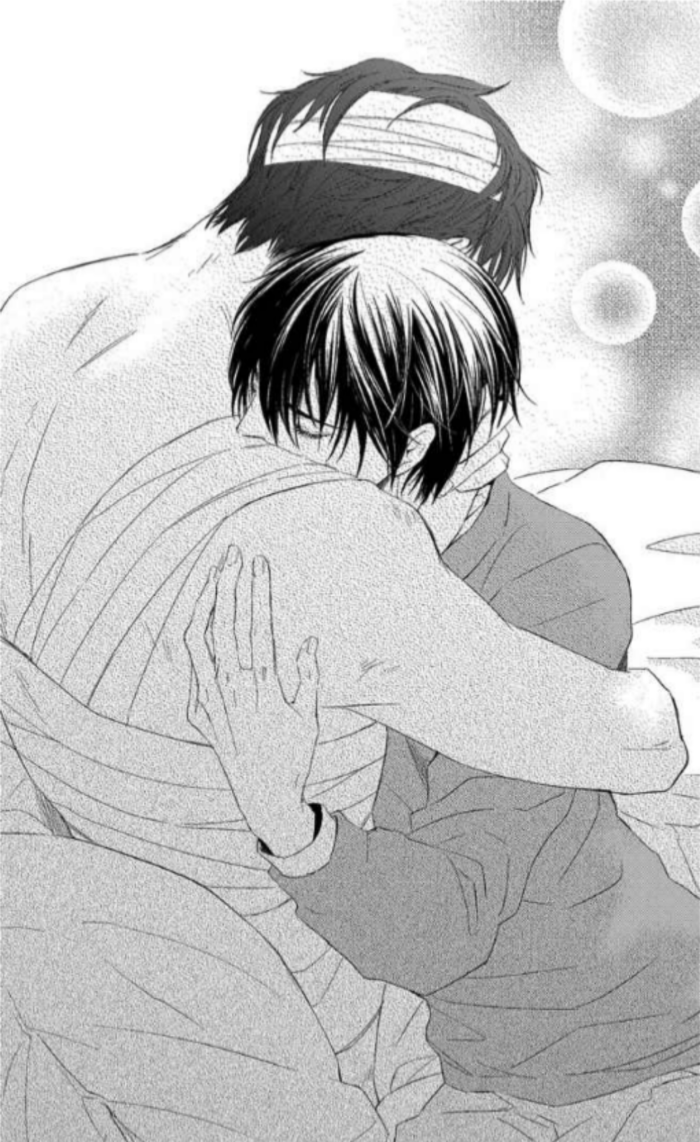 While he was unconscious of it, his instincts had clearly discerned the ‘scent’ of his fated partner.

Now he understood that they too had a destiny that tied them together.

Letting go of Takahito’s body, Arthur slowly moved his face closer while maintaining eye contacted. As he lost focus Takahito closed his eyes and waited for the kiss from his fated “pair”.

The moment lips laid upon his own, his whole body shook. Behind his eyelids his eyes grew heatedly moist.

In the intervals between kissing repeatedly while changing the angle, they whispered intimacies to each other.

Their glued together bodies were gradually tinged with heat. At once he desired his lover, but Arthur was injured and had just woken up. Thinking of that, Takahito restrained himself.

As if also having thought of the same thing, after stopping the kiss, Arthur embraced Takahito and regretfully dropped kisses on his hair several times.

When for the present the uprush of emotions had settled down, Arthur blew into his ear.

“Please fetch the mobile phone from the top drawer of the writing table.”

Like he’d been told to, Takahito picked up the mobile terminal that was inside the drawer and returned.

“Here. Is this what you wanted?”

Taking the mobile phone, after he had fiddled with it with his finger, Arthur once again returned it to Takahito. Being presented with the unlocked terminal, Takahito spoke in a bewildered voice.

“Call your family in Japan.”

Now, this is gonna be interesting…

Also, by the way, I joined the Chrysanthemum Garden’s (you know, pretty much the biggest Chinese  (and like two Japanese) BL novel group that seems to be on a mission to collect all BL worksXD) discord. So if you ever wanna say hi, and ask me anything about my projects like spoiler’s and stuff or anything else, feel free.