Yo, guys! Sorry this is so late. I messed up and thought I was supposed to update this on Sunday rather than Saturday. Silly me.

In other news, updates will be a bit slow for a few weeks most likely while I get used to living in dorms and start University. There’s still a lot of things my dorm room lacks in terms of necessities so it means a lot of running around looking for stuff etc. (I don’t even have a frying pan yet…or a desk lamp). I’m still holding to my Patreon goals for pages translated every day, but I won’t have time to throw in any extras. Still, I’ll do my best to make sure there’s no more than a week between updates.

However, he could not do something like running away.

For his sake, Arthur will probably become injured. Taking into account his actions would be wasting that precious concern, Takahito transformed while still burrowed in the snow.

After transforming, he slipped out from the snow and shook off the torn clothes.

Following Arthur’s ‘scent’ he began to dash across the snowy fields.

He ran for a little while, and the sound of multiple wolves howling became audible.

In his black and white vision, he perceived the figures of the three wolves fighting locked in a grapple.

Arthur and Wolfgang were clashing from the front, violently biting at each other, and Edgar was biting at Arthur’s hind legs from the behind.

No matter how strong Arthur was, two against one was disadvantageous no matter how you think about it.

Dashing towards the three wolves, while sprinting with force, Takahito sprang at Edgar from behind.

As he bit into his back, Edgar howled and let go of Arthur’s hind legs. Turning around, he raised his voice in anger towards Takahito.

The next moment after he felt a strong shock, as Takahito noticed that, he was pushed into the snowy ground. He was pressed down by the front legs of Edgar who had sprung at him without a moment’s delay and his throat region was bit by the widely opened mouth. The skin of the throat was thicker than in other parts, but nevertheless a cry spilled out from him at the pain of being pierced by fangs.

Having seemingly noticed Takahito’s presence because of that cry, Arthur blew off Wolfgang by head-butting him. After first moving his opponent out of the way, Arthur fiercely swooped down on Edgar who was pushing down Takahito.

This time Wolfgang threw himself upon Arthur who was biting into the back of Edgar’s neck.

The three animals turned into one lump and heavily tumbled around in the snow.

Uoo, Uooo kind of call, a low cry of resentment and an eerie sound of creaking made by bones colliding and breaking resounded.

Takahito circled the surroundings of the unfolding grand fierce fighting of the three wolves.

He must not get in Arthur’s way like he did earlier, Takahito thought, and he also could not carelessly participate in the fight.

Arthur’s fur was covered all over in blood, but he could not judge from afar whether the man was injured or were those spurts of blood from his opponents, and his uneasiness grew stronger. He was disappointed and irritated by his own self that couldn’t do anything.

Suddenly, Edgar withdrew from the three corner battle. Limping, he fell back to a location that was slightly apart. Somehow it seemed like he had injured his hind leg.

The remaining Arthur and Wolfgang too, used this opportunity to separate for the moment. Both of them lowered their bodies and slowly retreated, further widening the space between them. Placing a distance of about 10 metres between them, they glared at each other for a short while, but without being certain who started it they began to dash, and jumped.

The thick sound of the two heavyweight wolves colliding in the sky resounded. They fell in the snow in the posture of crossing heads.

The two, going up and down, hectically shifted their positions and bit at each other. fromtheir desire to kill each other you would not think these fellow people were from the same pack and were connected by blood.

Overwhelmed by the blood-stained mortal combat, Takahito could only watch attentively while shivering.

After a short while, the movements of the two who had mutually attacked as if mustering the last of their strength suddenly stopped.

(Has it come to a…conclusion?)

Takahito held his breath, and gazed at the two wolves lying on top of each other that had ceased to move.

If Arthur had died…as he thought that Takahito froze in fear, and could not approach. Edgar too stayed at a certain distance, and silently stared at the lump the two wolves made. 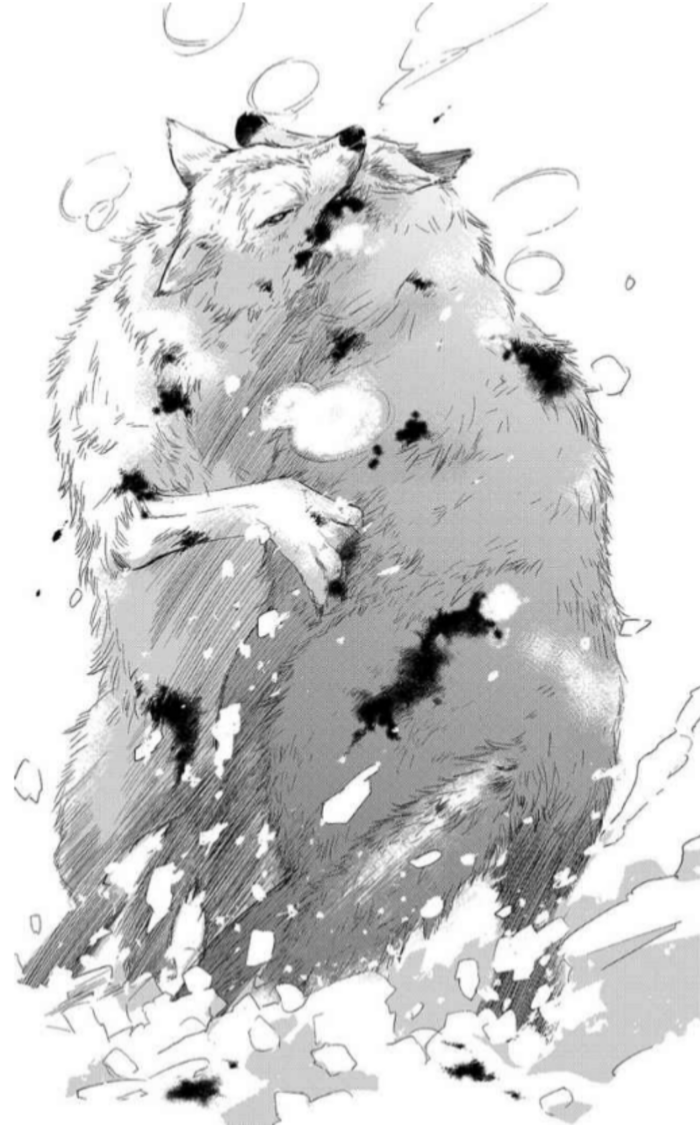 As if praying Takahito emotionally repeated his name.

A silence stretched out as if the whole forest was holding its breath, and when about 1 minute had passed, the black mountain within the snow moved with a twitch. From among the two wolves lying on top of each other, one got up swaying.

The whole body was darkened by blood, but here and there silver streaks glittered. Arthur.

Like a tide great joy rushed about inside his body. Springing up, and trying to run up to Arthur in wild joy, Takahito froze. He froze in place in shock.

Having begun to walk towards him, Arthur’s left eye was smashed, and an abundant amount of blood poured out of there.

Whether it was because of that or whether there was a bone fracture somewhere, Arthur’s gait was unsteady.

The closer he came, the clearer the damage that body had suffered became. Just by looking you could see a lot of lacerations. His fur was painfully torn, and with every one step he took forwards bright blood dripped from the wounds, drip, drip, dyeing the snow.

Nevertheless, Arthur continued to walk. His goal wasn’t Takahito. He directly went towards Edgar. Arthur faced him even though he was staggering.

Takahito understood the man intended to fight with Edgar even with his body having suffered the severe wound of losing one eye. Edgar had also injured his hind leg, but if compared with Arthur’ injury it was by far a more minor wound.

This time he will die!

The minute that such a dreadful conclusion floated in his head, Takahito began to run. He jumped in-between Edgar and Arthur. Putting Arthur behind him, he intimidated Edgar “Uuuu.”

From the back Arthur began to howl lowly, and pushed Takahito with his snout as if saying “Move aside!”

However, Takahito did not move.

He braced his four legs, steadily stared at Edgar and bared his fangs, asserting himself as Edgar’s opponent.

The throat wound made by Edgar earlier was still throbbing. If he said he was not at all scared he would be lying, but even if he died here he could not draw back.

(Even if I have to exchange my life…I will…protect Arthur!)

The fur all over his body bristling and heavy breathing spilling from between his gritted teeth, Takahito intimidated Edgar.

Anyhow, it had been desperate. If he saw even the slightest opportunity – he would take it.

Tension radiated from Arthur who was behind him. Takahito knew the man was watching for the moment when push comes to the shove, and he was about to rush out.

As widely as possible, Takahito opened his mouth and howled.

Opposite them, Edgar was silent. His eyes glowed silently.

Edgar slowly, languidly lowered his lifted tail. With his tail lowered, he turned around and began to slowly walk. Midway, he stopped walking one time, and turned his face towards the fallen Wolfgang, letting them see his worried bearing.

However, when he had ascertained that the black lump did not even twitch, he once again began to walk.

The sandy wolf gradually became more distant, while dragging one of its feet. Until that figure became completely invisible, Takahito continued to follow him with his eyes without lowering his guard.

The moment Edgar disappeared within the forest, the strained tension suddenly loosened.

Immediately after, there was the sound of a thud behind him.

Turning around, Takahito saw a wolf that had fallen over in the snow, having used up all its strength.

He was still breathing!

But if he didn’t soon receive medical treatment, most likely he will die from the large amount of blood loss.

It turned dark before his eyes.

He needs treatment as soon as possible…but it’s impossible for him to drag Arthur to the ‘Forest House’ by his own strength.

Enduring the urge to cry, Takahito pondered desperately. This was the most serious thinking he had ever done up until now.

He could only go call Eugene and have him transport Arthur by car.

After he had licked the mouth of the wolf that had blood flowing from one of his eyes, Takahito began to run over the snowy fields at full speed.

That’s it for chapter 11. So, did anyone see that coming? What do you think is gonna happen next chapter? How will Arthur fare?

We’ll see that next time~