Yosh! Here’s the second part. It’s later than usual, because I was making, well, I don’t know if there’s a specific word for it in English, but we call it Kompot in Latvian. It’s basically fruit, in my case apples and plumes, preserved in sugarwater. It’s a popular home-made dessert down here. So I spent half the day washing and cutting apples and other things while watching a debate between the candidates for the post of Prime Minister in Latvia (it was a real monkey show, ughh), so I had little time to translate.

But I did manage to find the time in the end, so enjoy~

Arthur, now alone, slipped into the dusk, and gradually carefully shortened the distance between him and the target.

This was the gist of the hunt aimed at their prey.

The boots made with a rubber sole did not make a sound. The ‘Eve’ was not looking back, but walking straight ahead while facing forwards. At present, it looked like he had not noticed the predator quietly drawing near him from behind.

Instead the one who felt a sense of discomfort as he was approaching the prey was Arthur.

He frowned with his eyebrows.

The target in from of his eyes did not have the ‘scent’ that was emitted by ‘Eve’.

Arthur had not met ‘Eve’, so he did not know that ‘scent’ either. But even without knowing, he had confidence that if they met he would naturally ‘recognize’ it.

It was clear he should be able to discern the female ‘scent’ of the one who would bear his child in the soon future.

However, he did not perceive anything from the ‘Eve’ walking in front of him.

The thing his sense of smell recognized first was the ‘scent’ of familiarity.

From that ‘scent’ there was no mistaking that the man in front of him was a werewolf.

However, that was merely a male ‘scent’ just like their own.

The possibility was there. More than 16 years had passed since ‘Eve’ had given birth to twins.

During that time, ‘Eve’ had not conceived.

Was it not because he had already lost his ability as ‘Eve’?

From the start even among werewolves ‘Eve’ was a idiosyncrasy, and that conception and birth an irregularity that that had a rare chance of awakening when a diverse group of factors had overlapped. It could be that one could spend their entire life while not realizing they were an ‘Eve’.

17 years ago the ‘Eve’ had to personally carry a child; it was probably a situation he could not help. Most likely it was a serious affair connected to the continuance of the Jinguuji family.

The result of the imminent urgent necessity was that the sleeping ability had awakened, and he had conceived.

Thus the family crisis had passed, and in the ensuing peaceful times his ability as an ‘Eve’ had probably retrogressed.

(The possibility of that was high.)

At the derived conclusion, Arthur felt chills steadily creeping up his body from his feet.

The only hope that was left for the continuance of the Gosford’s.

They were now…about to lose it.

Feeling his field of vision growing dark without his notice, Arthur firmly bit his lip with his molars.

Were they too late?

Had they forever lost the chance to obtain their saviour the ‘Eve’?

The darkness covering his vision was much darker than the dusk that was actually approaching.

Steadily the sound of Hayato’s footsteps was becoming more distant. That slender back was also melting into the dusk, and was on the verge of disappearing.

“What are you doing?”

He heard a muffled voice. When he turned, he saw Wolfgang standing there. He had probably approached feeling impatient at Arthur who was standing still as if frozen, and the disappearing figure of Hayato.

“Why are you standing there dazed?! Arthur!”

Gazing at his packmate’s irritated expression in silence, Arthur hesitated whether to convey the cruel truth or not.

Feeling something unusual, Arthur turned his face back forwards.

100 yards in front of them the ‘Eve’ had stopped and was talking with someone. The person was a still young man. He wore something that looked like a black uniform, there was a scarf wrapped around his neck, and he had a square bag hanging from his shoulder.

Judging the boy to be in his late teens, and guessing from their intimate appearance, it was most likely he was ‘Eve’s’ son.

There was no doubt it was one of the twins.

The two who had spoken with each other for a little while by the roadside before long waved their hands and went their separate ways.

Changing places with ‘Eve’ who was walking away, the young man walked towards them.

At once Arthur gave a ‘hide’ signal with one hand. He made sure Wolfgang had left, and started to walk towards the lone man.

In the darkness of the evening, only the sound of footsteps resounded in the residential area.

As ‘Eve’s’ son got closer, Arthur could clearly see his facial features.

Was the small face and the white skin something he inherited from his mother? The silky black hair fluently swayed as he walked. Dignified and slender eyebrows. A pair of almond shaped eyes. Black eyes that emitted a soft glossiness like that of a gemstone made wet by rain.

He had startlingly beautiful facial features for a man, but what shook Arthur more than his exceptional beauty was the ‘scent’ he was releasing.

The mating season had not yet come, so it was a ‘scent’ peculiar to the young werewolf.

The special ‘scent’ that was faintly mixed in the smell of yet unripe hard fruit.

It was a ‘scent’ he felt for the first time, but he instinctually understood what it was.

Originally it was a ‘scent’ he had finally discerned only after concentrating, but following the shortening of the distance between him and the young man, it steadily got stronger. In response to the ‘scent’ Arthur’s body was also tinged with heat. 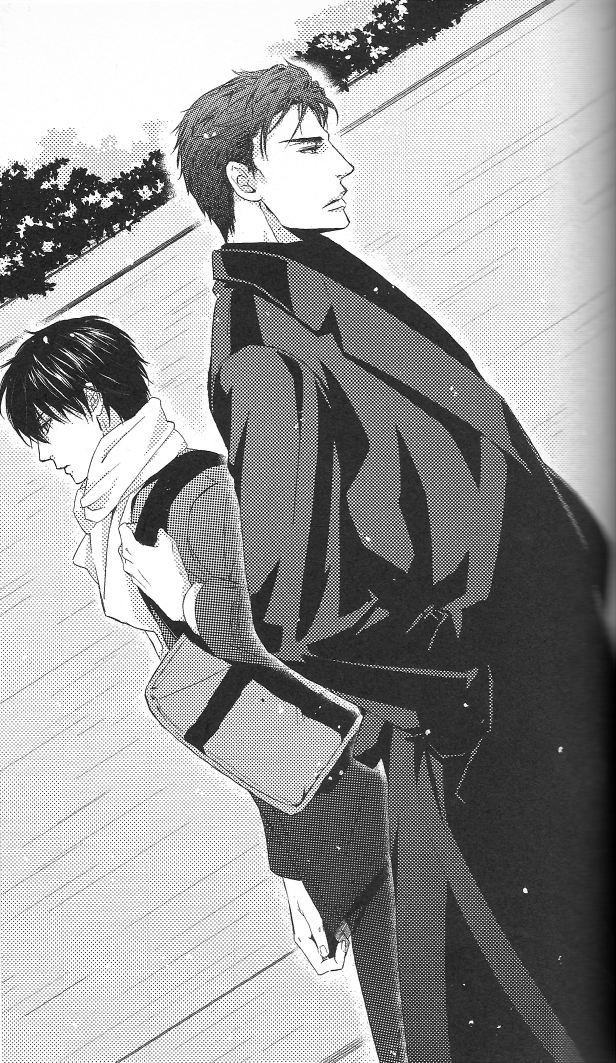 His whole body faintly sweated, and the sound of his heart was also loud.

Feeling that he was unusually worked up, Arthur deliberately shut down his excitement. So that the other did not realize he was of the same family, he suppressed his werewolf ‘presence’.

The other werewolf was still young, and had little experience, so it was clear his ability to discern those of the same family was also low, but it was a good idea to increase his wariness even if only slightly.

His head bent slightly downwards, the young man who had gotten closer, all of a sudden raised his head as they passed each other. Arthur’s eyes met the enchanting black eyes of the boy.

Instantly, like he had been hit by lightning, Arthur’s body was rattled.

Within that shock that shook him to his fingertips, he became convinced.

There was no mistake.

This young werewolf had inherited genes from his werewolf mother – he was an ‘Eve’.

To press down his impulsive desire to immediately throw himself upon the young werewolf Arthur had to mobilize his strength of control.

Putting strength in his abdominal muscles, while fighting with the impulse that made him want to turn back, he continued to walk.

As the distance increased, ‘Eve’s scent’ also faded little by little, and before long the footsteps stopped.

The gates were opened by a key.

(What should I do? Steal him?)

He pondered, keeping track of ‘Eve’s’ presence behind him.

If he forcibly kidnapped the young man it would make a lot of noise in front of the house, and the boy’s father and the nearby residents would probably come out.

(In this case, failure cannot be permitted.)

For the sake of soundly succeeding in pillaging the ‘Eve’, they should temporarily withdraw today and rework their plan.

Right after the sound of the door opening and closing had been perceived by his ear, Arthur turned on his heel.

As he rushed back unto the road he had come from with big strides, Wolfgang came running from the opposite side, his expression changing. The moment their faces met, Wolfgang urged, “What are you doing!”

“What happened with ‘Eve’? Why are you not following him?!”

He pointed in the direction the werewolf mother had left in with exaggerated gestures.

Walking off with Wolfgang who had an unsatisfied expression, Arthur returned to the parking spot. The minute he got in the minivan, Edgar bent forward and asked, “What happened?”

In front of the two who were waiting for an explanation, Arthur reflected on the lingering memory vividly left in his body.

The sensation that had shaken his whole body the moment he had smelled ‘Eve’s scent’.

He had despaired for a moment, but God had not abandoned them.

The appearance of the young ‘Eve’ was surely the only ray of light shining in the darkness.

Arthur informed his packmates who wore expressions of confusion.

“I’ll explain more once we get back. For the time being let’s retreat. It will be suspicious if we stay here too long.”

And here’s how Takahito got mixed into this..he…he

Next update definitely on Wednesday, I promise…unless something I didn’t expect happens.

I’m still raising funds for buying the second book in this BL series, so if you want to see the happy ending to this story brought to you in English, please consider supporting me on ko-fi!